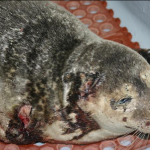 On March 9, at least two harbor seals were killed by a 15-foot great white shark, approximately 30 yards offshore from their rookery located just east of the Venoco Pier in Carpinteria. The first attack occurred at approximately 10:55am followed by the second at 11:20 AM. The harbor seal rookery is home to approximately 300 animals that wallow on the beach and feed just … END_OF_DOCUMENT_TOKEN_TO_BE_REPLACED

West Coast Shark Attacks Hit Historical High in 2007 by ETHAN STEWART With at least three unconfirmed sightings of Great White Sharks in the near shore waters just south of Pt. Conception in recent weeks, including Hollister Ranch’s fabled surf break, data on the subject of human and shark interactions in 2007 along the West Coast has taken on increased local relevance. … END_OF_DOCUMENT_TOKEN_TO_BE_REPLACED