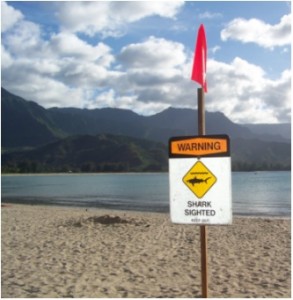 HANALEI — The morning sun was getting warm, the waters in Hanalei Bay were calm and beckoning. But save for a few isolated surfers, the bay was empty.

Shark sightings late Saturday afternoon closed the bay, which was supposed to reopen yesterday afternoon but instead remained closed at least until this morning, said Mary Daubert, county spokeswoman.

“It will likely re-open (today) but we had it remain closed as a precautionary measure,” Daubert said.

County officials would be meeting this morning to assess the situation and make a determination about whether to re-open the beach, she added.

One lifeguard working the area said there was a sighting of a shark at least 10 feet long close to the Hanalei Pier, and at least two more out in the middle of the bay Saturday afternoon.

“The surf’s gone down and the smaller fish are coming in,” the lifeguard said. “It’s all part of the food chain. What follows the small fish? Bigger fish.”

The shark sightings took place prior to the arrival of fishermen on boats who came in pursuit of the fish, the lifeguard said.

There are fishermen who use nets to surround the schools of fish, the lifeguard said. During this process, some fish get injured, and others die. They attract the sharks when they’re left in the water.

“It’s a natural cycle. It’s just that spring came a little early since the surf started calming down and the fish came back,” he said. “For now, we’re advising beach-goers who want to swim to visit Kealia Beach which is life-guarded. The surf there has also calmed.”

Stefan Schweitzer of ‘Anini was planning a day at the beach, but remained in the shade of the ironwoods after speaking with the lifeguards who were on patrol, advising beach-goers of the risks.

“The lifeguard said one of the sharks in the bay was wider than the Jet Ski they used to patrol the waters in,” Schweitzer said.

A water safety officer said swimmers should be aware that the fish have come back, and there is a risk of sharks for at least a couple of months, which could yield more beach closures.

Lifeguards said that, based on coloration, they believe those that were spotted were tiger sharks.

“We are advising all of the people we see,” the water officers said. “We’ve talked with all the surf instructors, and everyone is aware of the situation.”