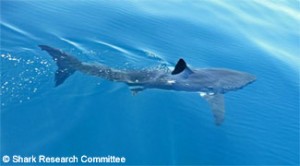 >Catalina Channel — On July 23, 2008 Bill Davidson was aboard a 42 foot Grand Banks vessel 10 miles off the coast of Long Beach. It was 11 AM the sky was clear and the water calm. Air and water temperatures were recorded at 74 and 69 degrees Fahrenheit respectively. Water visibility was 50 – 60 feet.

Davidson reported; “While returning to Long Beach we came upon a white shark, 13 – 14 feet in length. It swam right along side the bow of Pegasus for 10 minutes just like we were not there. I’ve attached a photograph for your files.”

It’s been said here before and I’m sure it will be said again: Great White Sharks love the Santa Barbara Channel, especially the deeper waters near the Channel Islands and in Northern Santa Barbara County near Point Arguello. Travel with experienced mariners ONLY.