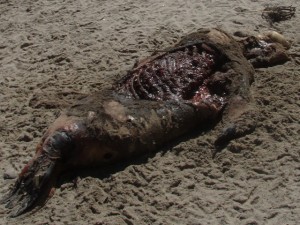 One of the most well-received and popular articles here at The Fear Beneath is our coverage of the decimation wrought upon a local seal this summer – by what we assume is none other than the man in the grey suit, a.k.a white death, a.k.a. The Fear Beneath.

After significant internal controversy here at The Fear Beneath, we’ve decided to release this EXCLUSIVE *SECOND* photo in the series, originally determined to be TOO GRUESOME for the general public. The massive bite on the carcass of this local pinniped demonstrates the voracity and appetite of the ocean’s greatest predator – the Great White Shark.

Every year, dozens, (if not hundreds,) of reports surface regarding a seal or sea lion corpse that’s washed up on a local beach. Such events are in addition to the tremendous number of pinnipeds that are being devoured whole by these magnificent creatures. This ages-old battle between apex predator and inevitable prey is often blamed for human casualties – the oft-disputed and controversial “mistaken identity theory.” In fact, erratic seal and sea lion behavior are all-too common indicators of a shark in the local waters, a kind of early warning system for humans. But we digress.

For more information, check out our Shark Section, or the original Bixby Shark Kill article.