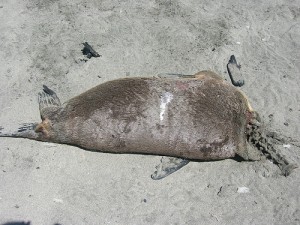 The Shark Research Committee has posted the following account of a pinniped casualty near Topaz Jetty in Redondo Beach.

On August 27, 2008 Cory Kupke was surfing at the Topaz Jetty in Redondo Beach. It was 2:25 PM and he had been in the water about one hour. He had surfed earlier in the day prior to work but returned to the beach about 1:30 PM. The ocean had been glassy at 8:00 AM but a slight wind chop had developed by early afternoon with the swell 2 – 3 feet out of the South and a water temperature of 60 – 65 degrees Fahrenheit. There was a thick marine layer with an air temperature of about 70 degrees Fahrenheit. Water visibility was good with the depth 8 – 10 feet at his location.

Rick Kupke reported the following; “My son Cory was surfing next to the Topaz Jetty in Redondo Beach this morning before work. The waves were fun so he went back for a second session after work in the afternoon. After losing his board on a wave he swam in to find it resting on the beach next to a dead Sea Lion which had its head cleanly bitten off. He paddled back out but decided to leave the water when he realized every wave was washing the Sea Lion’s ‘fluids’ back into the water creating an ‘Instant Chum Line’ right to the spot he was surfing. He was in the same location earlier in the day and the beach was clear, so the Sea Lion must have washed up between the time he left the beach for work at 9:00AM and came back to surf again at about 1:30 PM.”

Please report any shark sighting, encounter, or attack to either The Shark Research Committee or The Fear Beneath.