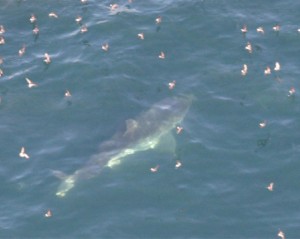 Marin County’s Stinson Beach was closed to swimmers and surfers after a great white shark was spotted Sunday night, according to national park officials.

“It was by a former lifeguard and fisherman, he knows what he saw, that is why we are confident it was a great white shark,” said John Ralph, the lifeguard supervisor at Stinson, which is part of the Golden Gate National Recreation Area.

Ralph said he immediately got people out of the water at Stinson on Sunday night, and then went to the adjacent Sea Drift and Bolinas beaches to let surfers there know about the sighting.

Stinson and Bolinas are both popular surfing spots.

John Ralph, chief lifeguard at Stinson Beach, said the shark was described as 8 to 10 feet long, which may indicate it is young.

“This shark had a lot of girth,” he said.

Officials are posting signs this morning to warn visitors of the sighting, and beachgoers will not be able to go in water past their knees.

Ralph said the beach was open Monday, but the water beyond waist deep was closed.

“I have a lot of kids today, I let them go knee deep and let them play with their boogie boards,” Ralph said.

The National Park Service posted warnings at Marin County’s Upton’s Beach, which is adjacent to Stinson.

The nearby beach in Bolinas, however, is neither a county nor national beach and when it is posted with shark warnings, it is usually done by local town residents, a Marin County official said.

The water at Bolinas was crowded with surfers on Monday, said workers at the 2 Mile Surf Shop, which also posted the shark warning on its morning surf report.

The last shark sighting at Stinson Beach was in May 2007, when a great white was also spotted about 125 yards from shore near the main lifeguard tower, Ralph said.

Beaches in the area of sightings are usually closed for five days, which is the length of time a shark tends to stay in an area to feed.

Stinson waters will reopen on Friday.

Shark attacks are rare and the victims usually survive, although there have been two fatal attacks in California recently.

In April, a man swimming off of Solana Beach in Southern California was killed, and in 2004, a great white shark killed a San Francisco man diving for abalone off the Mendocino County coast.

In Sonoma County, a body boarder was attacked off of Salmon Creek in 2003 by a shark and a surfer was bitten near the same spot in 2005. Both also survived.

Peter Klimley of Petaluma, a shark behaviorist at UC Davis, said this is the time of year that great white sharks arrive on the North Coast to feed on seals and sea lions.

A popular spot for great whites is Double Point, which is between Drakes and Bolinas bays, where they will feed during August, September and October, Klimley said.

Klimley said that when sharks do bite humans, it is a case of mistaken identity.

“They prefer energy-rich prey,” Klimley said. “They are in cold water, hence they feed on seals with all the fat and spit out people.”

Klimley also said that a great white traveling on the surface is usually on its way somewhere and less of a threat than one submerged, which is how they hunt their prey.

“I do think closing beaches is a good idea,” Klimley said.