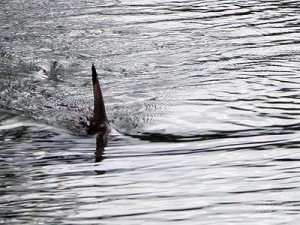 A bone-chilling account of shark confrontation from our colleagues at The Shark Research Committee!

Mike Anable, Evan, and Melissa, were surfing Ocean Beach near Pacheco Street, San Francisco. Anable recalled; “It was about 12:30 PM when Evan and I observed the dorsal fin of a shark, 10 – 15 feet in length, about 75 yards from our location in the line-up. The dorsal fin was about 2 ½ feet high. After seeing the size of the shark’s dorsal fin I told Evan I was going in and he came along too. I was kind of freaking out. I have never seen a fin that big. It was triangular and large which clearly got me and Evan moving. It was me, my roommate Evan, and my co-worker Melissa, surfing in the area. Melissa did not witness the fin. We walked up and down the beach to notify other surfers but the conditions were so poor that we were the only ones out in that area. We only saw a couple of land fisherman. I did not ask what kind of bait they were using.”