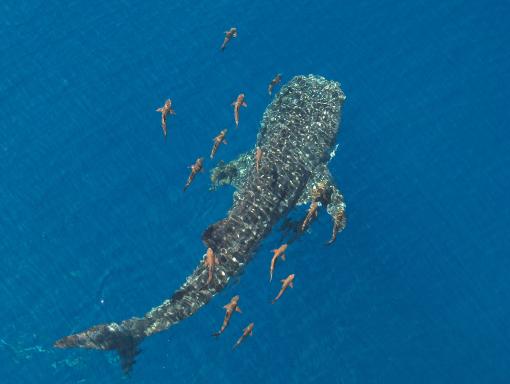 Scientists have become increasingly convinced that huge gatherings of giant whale sharks occur with clockwork regularity in the northern Gulf of Mexico off the coasts of Mississippi and Louisiana.

Scientist Eric Hoffmayer, who is trying to unravel the mysterious “aggregations,” said that as many as 100 of the bus-sized sharks have been spotted feeding in clusters at three separate areas about 40 to 100 miles offshore.

“We have lots of reports of 30 or 50 animals in one place,” said Hoffmayer, a scientist with the University of Southern Mississippi’s Gulf Coast Research Laboratory in Ocean Springs, Miss. “They are obviously gathering for a reason. But right now we are not sure what that is, or how they know to show up at these spots.”

Whale sharks, a key attraction at the Georgia Aquarium, are the planet’s biggest shark and can grow to more than 45 feet long. They are generally solitary, ocean-roaming creatures. Nobody knows how many exist. But there are a handful of locations around the globe where the polka-dotted, filter-feeding sharks congregate in large numbers to feast on plankton or fish eggs.

The northern Gulf aggregations, which occur from June through September, would be a major new discovery if scientists can confirm that they are occurring at regular, predictable intervals.

Hoffmayer recently discussed his findings with Georgia Aquarium researchers at the Second International Whale Shark Conference on Isla Holbox, Mexico. The downtown Atlanta aquarium is funding whale shark research in the plankton-rich waters off Holbox, a narrow strip of land alongside the Yucatan Peninsula north of Cancun that attracts hundreds of whale sharks each summer in one of the world’s largest aggregations.

Bruce Carlson, the aquarium’s chief science officer, said aquarium researchers are just beginning to talk with Hoffmayer and his associates about their findings. The aquarium is the only fish tank outside Asia to house whale sharks.

“There is already collaboration in terms of information sharing, and there will probably be more in the future,” Carlson said.

Confirming the aggregations is a difficult task. Scientists are confronted with a species that can wander across oceans solo, then suddenly appear in large groups to feed.

Hoffmayer enlists the help of fishermen, oil rig workers and pilots. He asks them to report the time, date and duration of whale sharks sightings, recording the sharks’ GPS coordinates and the number and size of sharks they see.

His group has created its own whale shark Web page, connected to his lab’s Web site, where whale shark observers can record their sightings. Hoffmayer’s group also has tagged a few whale sharks with satellite transmission devices.

Florida-based shark scientist Robert Hueter, whose Holbox research is partially funded by the aquarium, said he is intrigued by the northern Gulf aggregations and thinks they could somehow be related to the sharks he has observed off Holbox.

Hueter and his assistants, John Tyminski and Mexico-based biologist Rafael de la Parra, have placed about 700 visual tags on whale sharks off the Yucatan over the last few years. Those plastic identification tags let scientists know where the sharks were first spotted and — if they are resighted — where they travel to.

“None of the tags have been resighted in the northern Gulf,” Hueter said. “That doesn’t mean none of the sharks have traveled there. The tags could have been shed or they might not have been seen. But after tagging 700, you think they’d have spotted something up there.”

Hueter said one whale shark tagged off Holbox with a satellite transmitting device did move northwest from the Yucatan to an area off the Texas Coast. Hueter, director of the Center for Shark Research at Sarasota’s Mote Marine Laboratory, said he envisions future collaboration with Hoffmayer on his findings.

“When you talk about a species that travels thousands of miles and knows no political boundaries, collaboration between scientists is essential,” Hueter said.

Hoffmayer’s work has been mostly a labor of love, since he does not have a consistent funding source for his whale shark research. “It’s piecemeal,” he said.

He theorizes the big sharks get together in the northern Gulf to dine on massive concentrations of fish eggs; bonita, skipjack and tuna spawn in the area. Like Hueter, he believes the northern Gulf gatherings could somehow be connected to whale shark aggregations near Holbox, which occur at roughly the same time of year.

The Holbox whale sharks have spawned a booming ecotourism business for the small island, where fisherman have learned how to turn a buck hauling tourists offshore to snorkel with the gentle giants. Whale shark aggregations also have created ecotourism businesses in Australia, the Philippines, Belize and a few other locales.

So far, however, the northern Gulf whale shark gatherings are known only to a few scientists, pilots, charter boat captains and oil rig workers who have glimpsed the natural phenomenon far from the sight of land.

A boat approaching one of the aggregations on a calm day would probably first see the dorsal fins and huge tails of the sharks sticking out of the water. The sharks swim slowly and quietly near the surface, their huge mouths agape to take in tons of seawater from which they collect the tiny marine organisms and fish eggs they eat.

Occasionally, the sharks feed vertically, which means they stop in one spot and angle their bodies at 45-degrees, sucking in water near the surface and hoovering in their tiny prey.

Hoffmayer said that until recently scientists believed whale shark encounters in the northern Gulf were rare. In 2002, he said, scientists discovered two whale sharks in a school of yellowfin, blackfin and skipjack tuna.

“We wanted to know what the whale sharks were doing in a school of tuna,” he said.

Hoffmayer asked some local offshore fishermen if they had ever encountered whale sharks. Their answer stunned him.

“They said, ‘We see whale sharks all the time,”’ he recalled. “These guys see a lot of stuff out there, and they never think to contact us, and we had not been contacting them.”

Hoffmayer published a 2005 paper on the initial sightings and has continued to gather evidence to support his theory, enlisting fishermen and helicopter pilots who serve the Gulf’s 3,500 oil rigs.

Hoffmayer said that in 2006 a tuna fishing boat returned with video of 100 or so whale sharks it happened upon in the northern Gulf. That was two weeks after Hoffmayer and his researchers encountered a group of 16 whale sharks in the same area.

“A third of our sightings are of groups of animals,” he said. “We had a sighting of 30 or so a few weeks ago off the coast of Texas.”

One theory, Hoffmayer said, is that the whale sharks are initially widely dispersed in the northern Gulf, lazily feeding on plankton.

But, he said, they might somehow know when to congregate in fish spawning areas, where they would be able to gorge on nutrient-rich eggs.

Many fish species spawn on certain phases of the moon’s cycle, Hoffmayer said.

Perhaps the big sharks are guided by the lunar phases. But like many things about whale sharks, no one really knows.

“How do 30 animals know to show up for what is a 12-hour [spawning] event?” he asked. “Now that’s a wonderful mystery. It’s what we’re trying to figure out.”