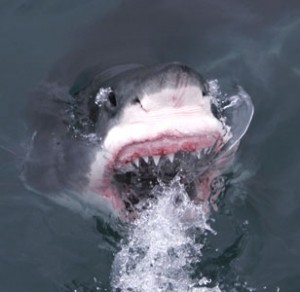 This report just posted on SantaBarbaraSurfer.com:

“5-6 ft juvenile caught in a trawler’s nets off of coal oil point this morning, brought back to santa barbara harbor alive in a flooded hold, tagged by biologists, and released 1 mile off sandspit within less than 2 hours.

my dad was at the harbor when they first came in, i came as soon as i could get off of work but by then they had just returned from releasing the whitey.

be prepared to hear of sightings at leadbetter…”

Followed up with (in the thread):

“doh i meant the pier in carp…whats it called again? but it was between rincon and that pier.

Thanks to SantaBarbaraSurfer.com for the hot tip.