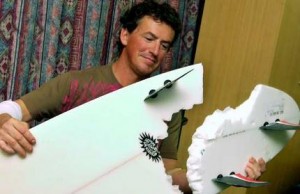 Central California has long been a mecca of legendary surf spots, but nothing wipes out the line-up like a dorsal fin cruising by.

Let’s start with the Facts First:

A Monterey man was bitten three times by a great white shark in late August.
Multiple shark sightings have been reported in San Luis Obispo County this year.
A national survey showed that Americans are most afraid of sharks.
Marine biologists say different species of fish are protected from sharks because of their striped appearance. One central coast company found a practical application for the theory.

“There definitely is a lot of fear related to sharks,” said surfer Brad Jonas.

The threat of great white sharks have tormented surfers for quite some time, but a local inventor says he has a product that can repel the oceans most feared predators.

A National Geographic special triggered the light bulb in Griff McConal’s head. “These guys had this theory that certain fish are protected by a striped pattern.”

McConal wondered if the pattern could protect surfers. So he developed the fingerprint, a zebra patterned decal, and tested it with other boards in the waters off Seal Island, South Africa where great whites are known for their aggressive behavior.

“The decoys were almost hit as soon as they were deployed off the boat. Some would take several approaches, some were hit immediately, some were ‘Polaris Attacks.’ Shark Camo after six days received no bites or bumps,” said McConal

Application is easy: get the bottom of your board as clean as possible, then find the middle of the board, or stringer. Next, unroll the graphic onto the board and remove the plastic to expose the vinyl decal. Then, remove any air bubbles.

Shark Camo users agree the decal is good for peace of mind, but is there scientific evidence to back the theory? For answers we tracked down Central Coast marine expert Terry Lilley, a surfing biologist known for his close encounters with sharks.

“The sharks do tend to, at the last moment, veer away from certain patterns and colors,” said Lilley.

McConal and Lilley agree shark attacks are both very rare and most likely mistakes, but the fear is still great.

Surfers say Shark Camo may be protection to calm their nerves.

“I’d do it. Why not? You’re protecting yourself,” said surfer Charlie Hamilton.

We should note that a shark’s reputation far exceeds his bite. In fact, sharks kill fewer than 20 people a year, and people kill over 20 million sharks.

Despite the numbers, sharks remain some of the most feared predators on earth. After countless hours of testing and use, McConal says Shark Camo users haven’t even had a close call.

Really love this picture (from the Shark Camo website) See people like that at the beach every day.