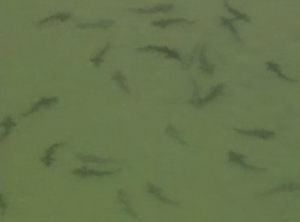 Just when you thought it was safe to go back in the water, swarms of sharks are invading the Southern California shoreline and that has swimmers on edge.

Large schools of leopard sharks have been spotted along the coast near Venice Beach and Marina del Rey. Swimmers say the sharks are not afraid of humans and have come right up to them in the water.

Although the sharks can appear menacing and can be up to six feet long, lifeguards say they are not threatening to humans. Leopard sharks are not maneaters and feast on shimp and anchovies which are plentiful this time of year.

Experts say the sharks’ visit to Southland waters is an annual event, and local beaches will stay open while they are swimming nearby. It’s not just Southern California that is seeing a large number of these spotted sea creatures, leopard sharks have been seen from Oregon to Baja, Mexico.

Leopard Sharks @ The Fear Beneath