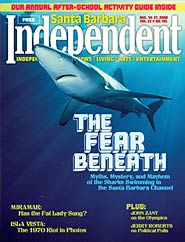 Our local weekly newspaper, The Santa Barbara Independent, inspired by the hard work we’ve been doing here at The Fear Beneath, has published a series of articles about sharks in the Santa Barbara Channel. The articles discuss the presence of sharks here, historically and in the present day, and provides some interesting information and perspectives.

Further, and more importantly, the S.B. Channel, with its nutrient-rich upwelling, bulging seal populations, and strategic location just below the bite of California (no pun intended), is, as Lowe puts it, “the nursery of the eastern Pacific. These sharks belong here. It is their habitat.”

Topics of discussion include sharks as people food, people as shark food, local shark species in the Santa Barbara Channel, and Chumash History with the shark.

Look for a Fear Beneath mention…