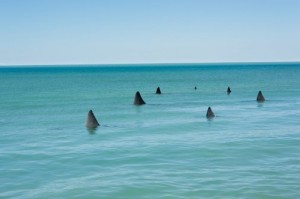 The Fear Beneath has covered a string of shark-related events on the Big Island of Hawaii in the last couple of weeks. We reported on three shark sightings closing the beaches a couple days ago, and the disappearance of Big Island man Kameron Brown that coincided with the sighting of an extremely large great white shark off the coast nearby.

Watch where you swim on the Big Island. After two days of shark worries, a string of sightings shuts down yet another beach.

State wildlife officials report confirmed sightings Monday of 15 large sharks along the northwest side of the Big Island.

Three beaches are now closed along the Kawaihae coast. Hapuna State Park and Waialea Bay were closed Sunday because of shark sightings. Now add Spencer Beach Park to that list.

That’s about a five mile stretch near the the Mauna Kea golf course. Lifeguards at Hapuna beach say the animals appeared to be tiger sharks ranging in size from about 6-feet to 16-feet long.

It’s unknown if they’re the same sharks seen in that area over the weekend.

Officers with the fire department and Department of Land and Natural Resources have been tracking the sightings and are warning everyone in that area to stay out of the water until further notice.