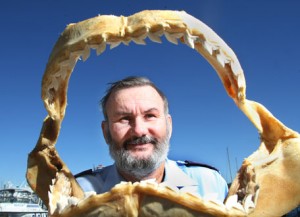 With the recent controversy over the use of shark nets on Australian beaches, this article provides some interesting information on the shark net program and some of the characters that work in the field.

It’s a trifle chilly but perfect on the Gold Coast and shark catcher Craig Newton greets the day with a grin as he boards his boat ready for the work.

Escorted by a flock of seagulls and a flotilla of dolphins, the Gold Coast’s official shark catcher turns his vessel, the MV Grinner, hard to starboard out of the Southport Seaway and motors south.

The happy-go-lucky Newton is living up to his and his boat’s nickname, cracking jokes with deckhands Mick Hockley and Kayne Roberts as the oily-calm Broadwater gives way to the only slightly more ruffled open sea.

There’s barely a breath of breeze and the ocean’s so flat you could waterski out here.

“Keeping the dream alive” proclaims the sign on The Grinner’s wheelhouse.

On mornings like this, with a fireball sunrise and the dolphins riding the bow wave, it’s a dream job indeed. But try spending half a day out here hauling up deadly sharks, baiting drumlines and fixing nets when its blowing 30 knots from the south, teeming with rain and 3m swells are tossing your boat like a cork – on Christmas morning, no less.

“It doesn’t get much better than this but when it’s rough, it’s shithouse,” Newton, 39, says.

The nuggety fisherman has been keeping the dream of a shark fatality-free coastline alive since he was appointed the Gold Coast shark-net contractor in 1996.

A love of fishing and boating runs in his family and when a friend landed the shark-netting contract in Sydney in 1993, Newton eagerly jumped aboard.

After two years tending the shark nets off Sydney, Newton moved to the Gold Coast where he started his own fishing and dive charter business. He subsequently landed the Department of Primary Industries contract for the shark-netting program there.

Every second day and every public holiday, he and his crew put to sea to check the network of nets and drumlines designed to shark-proof Australia’s tourist playground. There are 35 drumlines and 11 nets, stretching between the Southport Spit and Snapper Rocks.

The Shark Control Program was introduced in 1962 after a spate of fatal shark attacks in Queensland, and comprises 32 nets and 332 drumlines staggered along the coastline from Coolangatta to Cairns.

The nets, about 190m long and 6m deep, are anchored to the seabed 500m off 84 of the state’s most popular beaches

Newton has pulled in hundreds of sharks over the years, some as big as 4.5m. They include tigers, whalers, hammerheads, bullsharks and, most disconcertingly, white pointers.

Only last month, Newton caught a 3m, 200kg Great White on a baited drumline off Tugun.

So big and powerful are some sharks out here that they can straighten the 250mm, 10mm thick steel hooks that Newton and his boys bait up with whole mullet and large chunks of shark meat. These predators of the deep are quite partial to their own flesh and blood.

The stranding of dolphins, turtles, dugongs and whales in the shark nets has sparked calls from environmentalists for the nets to be removed. Several whales have died after becoming entangled in nets, prompting passionate outcry.

But the State Government has repeatedly ruled out removing the nets, pointing out that there has not been a fatal shark attack since the scheme was introduced 46 years ago.

“We’re out here for public safety,” he says. “We’re not out here to kill everything and nor do we want to kill anything other than our target species.”

The nets and drumlines trap only about five dolphins a year, he says – and can’t recall the last time he caught a turtle or dugong. Whether it’s as a result of sonar beep-emitting whale and dolphin alarms fitted to the nets, or whether the animals are just getting smarter, Newton isn’t sure, but whale strandings have also dropped markedly in the past couple of years – despite up to 11,000 humpbacks now making the annual winter migration up the coastline.

Newton also denies the nets and drumlines provide a false sense of security. Contrary to popular perception, they do not provide a continuous chain of protection and there are plenty of large gaps through which sharks can cruise.

Newton points out that last year, he caught almost 50 sharks in the nets and lines.

“One bull shark, one tiger shark or one white pointer close to our beaches is one too many. They’re a big danger,” he says.