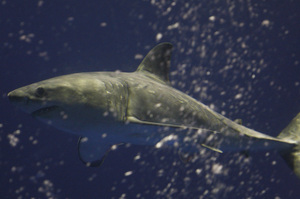 The Los Angeles Times blogs about the female adolesecent Great White Shark that recently spent an 11-day stint in the glass slammer at the Monterey Bay Aquarium.

Remember the great white shark caught off the SoCal coast, moved to an exhibit in the Monterey Bay Aquarium, then released after 11 days because she wouldn’t eat? She was caught by the tail in a fishing net, just 22 miles from where she had been released, officials at the aquarium said today in a press release.

“From the description the fisherman gave us, she’s in excellent condition,” Jon Hoech, director of husbandry for the aquarium, said. “That’s great news. At the same time, the fact that she was caught is a reminder that young white sharks face very real threats in the ocean.”

The fisherman had deployed his net to catch thresher sharks and found the young white shark in his gear when he checked it shortly before 7 a.m. Thursday.

After putting the shark in the bait well of his boat, he called a member of the aquarium’s white shark conservation research “rapid response team.” He was then instructed to check the shark’s physical condition and release her immediately.

“He checked her body and eyes for any injuries, and set her free,” Hoech said. “His description was that she was ‘very lively, a very hot fish.’ He also said that from the appearance of her belly, it looked as if she had recently fed.”

At less than a year old, the shark is still feeding on fish. It’s not until she gets older that she turns to larger prey, like seals and sea lions. She’s wearing a tracking device, so aquarium officials should be able to keep an eye on her movements.