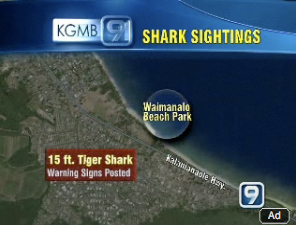 Then on Sunday afternoon, someone reported a six to eight foot shark at Lanikai. Astate land officer could not confirm the sighting so the beach is still open. This comes after a busy week of sightings and one attack.

On the Big Island, what state experts call the biggest influx they have seen in a long time kept beaches from Hapuna to Waialea bay closed for six straight days. They reopened but signs stayed posted Friday.

On Tuesday, Todd Murashige was bitten on his right leg while surfing Crouching Lions.

“I just kind of … reaction … just ahh. And just right there and I stuck my fingers into his mouth to try and pry him off,” Todd Murashige said.

The 40-year-old father of two paddled himself back to shore. He could be out of the hospital this week. And Thursday, a 10-to-12 foot tiger shark off Laniakeas and Chuns Reef had lifeguards pulling people out of the water. No one there was hurt.