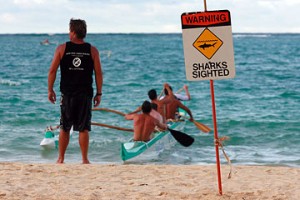 Amateur surfer Todd Murashige was attacked Tuesday evening off the windward side of Oahu, by what is suspected to have been a large tiger shark.

The Fear Beneath staff wishes Todd all the best for a speedy recovery.

A 40-year-old Kaneohe man remains at the Queen’s Medical Center recovering from a shark attack in Kaaawa. Todd Murashige is in stable condition with extensive injuries to his right leg and fingers. A shark bit Murashige about 5 p.m. yesterday at a surf spot known as Crouching Lion’s.

Warning signs lace a two mile stretch of the windward coastline in Kaaawa following Oahu’s latest shark attack. “We have signs posted and we’re letting people know a mile either side of where the incident occurred,” said Lt. John Hoogsteden of the city’s ocean safety division.

The shark attack happened at about 5 p.m. Tuesday about 300 yards offshore at a surf spot known as Crouching Lion. 40-year-old Todd Murashige told emergency officials he was sitting on his surfboard when he was attacked. Murashige paddled himself to shore accompanied by another surfer. He was taken to Queen’s Medical Center in serious condition.

Murashige is an accomplished amateur surfer who has won many local events. His latest victory came in June when he won the senior men’s division of the Hawaii Amateur surfing state championships at Ala Moana Bowls.

Wednesday officers from the Department of land and Natural Resources were back in the ocean near Kahana Bay along with city lifeguards.

“We plan on being here all day today — 24 hours after the incident and we’ll go from there,” said Hoogsteden.

This is the second shark attack at the break in just over a year. Last August 15-year-old Josh Sumait was attacked by a shark while bodyboarding at Crouching Lion.

“They seen the shark coming up and they screamed and he looked back and his foot was all the way in the shark’s mouth,” said Sumait’s cousin Daryl Cabral of Hauula. “A big shark — like 14 feet.”

“This is like the second shark attack within one year,” said Daniel Morita of Kaaawa.

“I was surprised when I heard about this, two shark attacks so close together,” added Cabral.

Residents in Kaaawa are baffled by the amount of shark sightings in the area recently — although many have a theory.

“Back in the days there was a lot of turtles and a lot more monk seals and now I think they’re coming back more the sharks have something to feed off of — that’s why there’s a lot more sharks that’s what I think,” said Morita.

“I don’t know – maybe the abundance of food,” said Cabral.

Many shark experts disagree and say there are simply more people in the ocean. Morita isn’t convinced.

“There’s so much turtles out there – like a lot,” said Cabral.