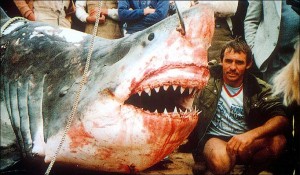 His controversial artworks have made Damien Hirst a staggering £200million fortune. And this week he raked in an eye-watering £9.5MILLION for The Kingdom, a dead tiger shark in a tank of formaldehyde, at a Sotheby’s auction. But the maverick shark hunter who catches the terrifying beasts for Hirst says a prime specimen would normally fetch just £90.

The Sun tracked down fearless 59-year-old Aussie Vic Hislop at his home in Hervey Bay, Queensland.

He said: “I’ve been a shark hunter all my life, so I found it a great honour to have someone like Damien Hirst call and ask me to catch one.

“It’s brilliant when I see pictures of the sharks I’ve supplied splashed over papers around the world — and also to see the incredible prices they fetch. To think what Damien Hirst has done just by putting his name to a shark.”

“Any good specimen, which is caught and killed for meat would sell for about $200 (£90). Yet as works of art they fetch millions. I take my hat off to Damien for making a simple shark carcass so valuable. And I have to admit that, when I see pictures of his work, I pinch myself and think, ‘That’s one of mine.’ ”

Hirst, 43, made a staggering total of £111m from the auction of his work on Tuesday — TEN TIMES more than the previous high for a sale of pieces by a single artist, Sotheby’s said.

Thanks to his shark art and other creations, including a diamond-encrusted skull, a rotting cow’s head and a winged piglet, he is the world’s richest living artist.

As a lifelong shark hunter, Vic receives commissions from scientists, museums and exhibitions to catch a variety of species.

The largest he ever caught was a 21ft Great White, weighing 2.47 tons.

And when Damien Hirst called out of the blue asking for a 13-14ft tiger shark, Vic was only too happy to help.

Vic said “Sharks have been my life since I was 12. That’s when I spotted one gliding through the water for the first time. Thankfully, I was on the shore — and I was transfixed.”

“Because I’ve studied sharks ever since, I know what they eat, where they travel to and when they travel. I fixed Damien up with a fantastic shark easily enough. I’ve caught several for him since that first order — but I can’t remember exactly how many. I use bait and hooks like you’d expect — but of course it’s important that the sharks aren’t wounded. Otherwise, they wouldn’t be fit for Damien’s purpose.”

Vic’s outspoken views on what he believes is an official cover-up of shark attacks have made him a controversial figure in Australia.

He even runs a private museum in Hervey Bay to publicise his explosive claims.

And, unlike many experts who say the most feared shark species aren’t always aggressive, Vic reckons they do deserve their reputation as the terrors of the deep.

He said: “A lot of people disagree with my ideas — but I know they’re true. There’s a huge cover-up surrounding the real number of people killed by sharks in Australia. The power of the dollar is put before human life. Officials don’t want to jeopardise the tourist industry by revealing the true extent of fatal shark attacks.”

“Naturally, I’ve received a few scars myself over the years — but I’ve never had a serious accident. In this game you expect a few scrapes and scratches along the way. I accept it as part of the job I love.”