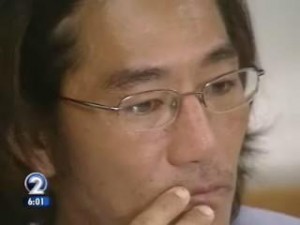 When Todd Murashige recalls his shark attack Tuesday evening, it’s not the pain that brings him to tears — it’s what his family must have felt hearing the news.

“I told myself if I black out I’m gonna die, that’s what I really felt in my gut so I called my wife and I called my mom.”

He’d been sitting on his board at the surf spot called crouching lion when suddenly he saw what he thinks was a tiger shark head on his lap.

“It kind of seemed fake, a shark head this big just right on my leg, my reaction just ahhh and just right there I stuck my fingers into his mouth to try to pry him off.”

He lacerated a finger in the process.

“I started paddling in, looked back behind me and seen my piece of board that was broken off floating away and just wanted to make sure tha the shark wasn’t going to finish me off .”

Getting to safety was no small feat — about a half mile to shore, 8 to 10 minutes of paddling.

“He is in great shape and we appreciated that because it made everything a lot easier,” said Orthopedic surgeon Kevin Christensen.

His doctor says Murashige may have been bitten twice.

“It was just a test bite, he never came at me really aggressively, took a test bite and wasn’t too good tasting maybe. Pain-wise, really nothing, I think you could take a knife and cut my finger it would be more sore.”

His doctor says he’ll walk and could even surf again.

This longtime surfer won June’s “surf to summer” competition. initially after the attack he thought surfing again wouldn’t be worth it, but he changed his mind already.

“In reality you’re a surfer and you’re just going to go out there and surf .”

He is expected to stay at Queen’s Medical Center through the weekend. his doctor says he may stand by the weekend but won’t be able to bend his knee for some time.