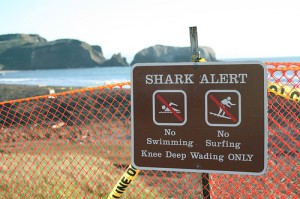 Stinson Beach reopened to surfers and swimmers Tuesday morning after being closed for more than a week after two sightings of great white sharks.

There was also a reported sighting of a shark Monday, but National Park officials said they could not verify it.

“Sometimes people come up to the lifeguards, and say they saw something, sometimes they see a shark, sometimes something that looks like a shark, sometimes it’s kids,” said Mike Feinstein, a National Park spokesman. “You should always be cautions going into the water at Stinson Beach, there are always sharks out there, and the water temperature is 55 degrees.”

The waters off of Stinson Beach, part of the Golden Gate National Recreation Area, were closed by lifeguards on Aug. 24 after a fisherman and former lifeguard reported seeing a 10-foot great white shark some 75 yards off shore.

A five-day closure of the waters was extended after a second sighting Thursday night in the same place.

“I would not say there are more sightings than usual,” Feinstein said. “Sharks are out there on regular basis, whether or not they are sighted is happenstance. We know this is where there are sharks.”

Stinson and the rest of the Bolinas Bay, which includes Marin County’s Upton Beach, Sea Drift beach and the beaches off of Bolinas, are popular for surfing and swimming.

While there usually several sightings of great white sharks, attacks are rare and non-fatal.

The last shark attack of a surfer at Stinson was in 1998, a surfer was bitten in Bolinas in 2002 and a surfer was also bitten at Dillon Beach in 2006. All of the victims survived.

In Sonoma County, a body boarder was attacked off Salmon Creek in 2002 by a shark, and a surfer was bitten near the same spot in 2005. Both also survived.