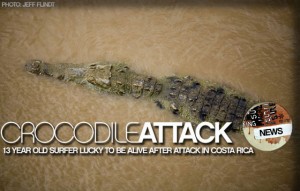 Reprinted from ‘Surfing’ Magazine… A little atypical for our coverage here – but nonetheless important.

An excerpt from the second page: “The photos of the damage inflicted on Dakota are horrific, stomach-turning images. Surreal, yet hauntingly realistic, too gruesome to post here.”

So you’re in Costa Rica, surfing the renowned Playa Hermosa. The water’s warm, the waves are fun and the sun’s out. Surfing don’t get much better than this. You get a nice wave, kick out and begin paddling out through the trail of broken whitewater. Then it hits you. Searing pain shoots through your right leg and before you realize what’s happened you’re being dragged and thrashed around in the water by one of nature’s most perfect killing machines.

This is what happened to 13 year old Dakota Kilbride just a couple of days ago. “Whoa, another shark attack in Central America?” you might be thinking, “gnarly.” But you’d be wrong. As it turns out, crocodiles hang out in the nearby rivermouth at Playa Hermosa. And while croc attacks on humans in the area are virtually unheard of, it doesn’t mean there aren’t a few renegade crocs out there who decide to break the rules.

The photos of the damage inflicted on Dakota are horrific, stomach-turning images. Surreal, yet hauntingly realistic, too gruesome to post here. You can almost plot the points on his leg that the crocodile’s teeth pierced his skin moments before the croc performed its infamous ‘death roll’, which opened up Dakota’s leg like a tin of sardines. Like one of those alien autopsy videos, you’re not quite sure that what you’re seeing is authentic. But when you realize it is, you find yourself with jaw agape, wondering how anyone could survive so much trauma. Especially a kid. But Dakota’s strong. There was a special delivery of skin tissue from Miami to graft onto his leg, but it turns out he didn’t need it.

Close family friend Jim Hogan was one of the first on the scene and has been bedside with the Kilbride family throughout the ordeal. “Everything about this situation is a little miracle. From Dakota not losing his leg, to not needing the skin graft. It’s been a series of million to one things that have gone his way.” Hopefully a couple more minor miracles are on the horizon for Dakota too, because now he’s got some big hurdles ahead of him; months of rehab, muscle atrophy, not to mention complete loss of muscle tissue in the first place. All this physical preparation is before he even considers getting in the water again and the massive psychological battle this would entail. But for now Dakota’s being a kid again, checking out internet sites from his hospital bed with Mom and Dad by his side. And probably feeling like the luckiest 13 year old in the world.