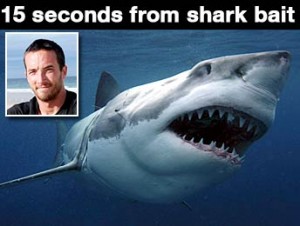 Broad Beach surfer Ben Vining felt like a sitting duck after what he says was a shark knocked him from his board at Byron Bay.

Mr. Vining has told of his ordeal in the surf at Tallows beach on Saturday, saying his board was carried off by a rip and he had to wait 15 seconds to catch a wave to shore while the shark watched him.

The 29-year-old had just spotted a pod of dolphins off the point when he noticed a large shadow below him.

“At first I thought it was another dolphin but before I could get a second look there was a large bang and I was lifted up into the air,” said Mr Vining.

“I fell off my surf- board into the water and when I looked back I saw this huge thing thrashing about. Half of its tail came out of the water and you could see most of the shark,” he said.

“I started to get a bit worried because I was just floating in the water and my board had been sucked out in a rip.”

With the shark swimming between him and his board, Mr Vining had to wait for a wave to carry him to shore.

“Luckily I got in OK and another surfer got my board for me,” he said.

“The shark was about seven foot and I’ve been on the internet all day trying to figure out what it was.

A fin was ripped from the board, which has teeth marks, and the leg rope was snapped.

“I was more scared afterwards and I guess I’ve been in a bit of shock since then.”

Several surfers paddled back out in to the water five minutes after the incident but quickly returned to shore when they spotted the shark still hanging around.

Northern NSW Lifeguard Co-ordinator Stephen Leahy said a search for a shark could not begin until the surfer behind the allegations came forward.

“At this point we don’t know what we are dealing with because no one has come forward,” he said.

“Unless it is a rogue shark we are talking about, it is highly unlikely that we could go out and hunt the shark. It’s just not what we do. We are unaware of any shark attack report in the area. Cape Byron is a spot for regular shark sightings and this can range from great whites to bull sharks. One thing that has been said to me is that there have been recent shark sightings in that area by local surfers.”

A spokesman for Byron Police said they had no report of a shark attack at the weekend.

Local surfer Ed Standfield said there were always shark sightings in the area.

In the past five years locals had seen more sharks in the waters than ever before, he said.

“There are a lot of sharks around Ballina and Lennox Head,” he said.

“The young boy who was taken by a shark in Ballina was venturing into murky waters, terrible conditions for surfing.”

“This isn’t a dangerous place,” he said.

“It’s more dangerous trying to get to the beach than swimming in the ocean,” he said.