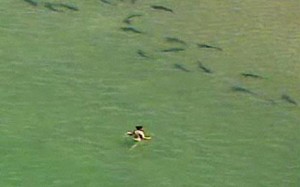 A woman has been caught on camera almost stepping on a group of sharks as she walked out of the sea.

Paddling through California’s crystal clear waters, the swimmer had no idea she was surrounded by dozens of leopard sharks. Suddenly spotting the fins, the unknown swimmer makes a sprint for the shore.

This near miss was spotted by a news helicopter in Marina del Rey. The helicopter was in the sky providing routine traffic updates for the Los Angeles television station KTLA.

The distinctively marked leopard shark has dark brown spots on a silvery grey background and is known to grow up to six feet in length.

But the International Shark Attack File does have one report of an incident involving a human and a leopard shark.

However the incident did not reportedly cause any significant damage to the victim, and no bite was involved.

Unaware of the leopard shark’s timid nature, this swimmer appeared hugely relieved to escape from what she thought may have been grave danger.