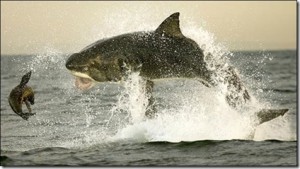 A total of 47 sharks have been spotted in and around the Whyalla area since October 2005.

That is, according to a report the Maritime Museum curator Paul Mazourek issued late last month. A Conservation Council of South Australia initiative, “White Sharks Count”, was launched a few years ago and concentrated on the Eyre Peninsula.

Mr Mazourek was approached to run the program in Whyalla.

“The original program lasted only a year, however, I continued for another two,” he said. “Therefore, the Whyalla area was under scrutiny from October 2005 until September 2008. The completed sightings were always forwarded to SARDI, though I have never heard back from them with regards to their research.”

He said he collected observation sheets from amateur and professional fisherman to collate the data.

Of the 47 shark sightings reported, 22 were spotted near Mount Young to the Murninnie area. Another 11 sightings were reported from the foreshore to Marek’s Reef marina. There were six confirmed sightings at Point Lowly while there were three at False Bay and two sightings at the Fitzgerald Bay fish farms. Another three sharks were seen at unspecified areas up to 20 kms outside of Whyalla.

“I appreciate co-operation from all parties involved, especially Allan Slater, Jason Wells, Steve Storic and Rob North,” Mr Mazourek said. “People are welcome to report sightings to me at the Whyalla Maritime Museum.”