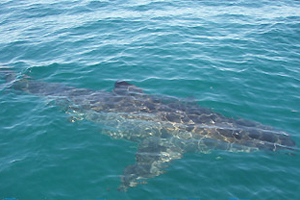 A family stalked in their boat by a great white shark off Adelaide yesterday says they feared for swimmers at a nearby beach. The massive shark – one witness said it was longer than 5m – was seen as close as 1km from the West Lakes Shore beach by boaters aboard at least three vessels between 8.30am and 11.30am yesterday.

Aldgate mum Melinda Barnard was aboard an aluminium boat about 4km offshore with her father, Ian Westley, and sons Max, 6, and Eli, 4, when they spotted the huge shark approaching the vessel around 11.15am.

Ms Barnard, 35, said the shark was about as big as the 5m boat she was in. “He had a nibble of the outboard motor and then nudged the boat before circling us for about 15 minutes,” she said.

“It was like something out of Jaws. I made eye contact as it raised its head out of the water just near the bow of the boat. It was scary because it was like he was sizing me up. I guess you get a bit paranoid, because I kept the boys in the middle of the boat in case it leapt out of the water. I looked back to the beach and saw all these swimmers and I knew the shark was looking for a feed. . . ”

Kerryn Manuel, 33, saw the shark from his boat about 8.30am when 2.4km offshore. “It was huge, as big as Jaws, and I was shaking because it was so scary,” the Royal Park resident said. “It was a big white pointer which could have easily swallowed a person whole – my boat is 5.75m in length and this thing looked even longer.”

Also on board the boat was Mr Manuel’s son, Clayton, 7, and fishing mate Les Cook. Clayton said he would certainly have a tale to tell his mates at school tomorrow. “I was scared,” he said, “but not as much as dad.”

Police reported another sighting of a large shark, possibly the same one, about 1km off West Lakes Shore beach about 8.30am.

Surf Life Saving SA state manager Shane Daw said reports of sharks the size of yesterday’s were uncommon. “Sharks are attracted to bait and blood, and they are also inquisitive creatures who will nudge a boat,” he said. He said helicopter patrols of the metropolitan foreshore would begin on November 1.

Five people have been taken by sharks in SAn waters since 2000. Dr Rachel Robbins, from the Rodney Fox Research Foundation, confirmed from pictures that the shark was a great white.”Six meters is about the size limit for this species but even if it is 5m that is still a big shark,” she said.