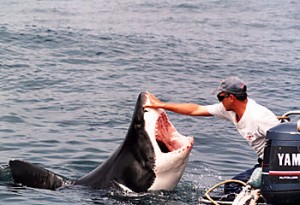 This is not a great idea, nor does it have anything to do with this article other than the Great White Shark

In February last year, Wool Bay couple Anne Russell and Barrie Hunt reported a close encounter with a 15-foot White Pointer shark while they were fishing off Wool Bay.

On Friday, both having the day off, they decided to head out to catch a few whiting in the waters of Coobowie Bay. Having dropped the anchor and as the boat settled into position, Barrie put the berley pot over the side ready to settle back for a relaxing day’s fishing.

“No sooner he’d done that he was telling me to have a look at the 10-foot White Pointer alongside our boat! It did a quick turn around and then went under us,” Anne said. “Then he said ‘here it comes again, but man, that grew fast — it’s now 14-feet! So we actually had two of them hanging around!

“These two seemed slimmer than the one we saw last year but still big sharks both of them.” Anne said, within a few minutes, they had gone and she and Barrie stayed put and managed to score a few whiting.

“This made me feel much better knowing the whiting wouldn’t be biting if the sharks were still around,” she said.

Talking about their second close encounter when they returned to shore, they were told that there had been a couple of sightings off the Edithburgh jetty during the holidays.

With reports in the Adelaide papers at the weekend of a White Pointer menacing a boat not all that far off shore, Anne says it serves as a timely warning to be vigilant as more of us head out on the water with the advent of warmer weather.