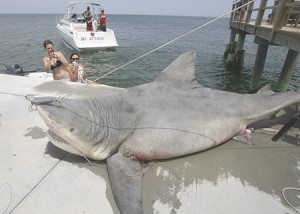 This magnificent beast of a bull shark is precisely what you should fear beneath.

People should be more concerned about bull sharks in Tweed’s murky rivers than great whites in the ocean, a local shark expert said yesterday.

Over the past few days great whites have been caught off Rainbow Bay and Mermaid Beach, and on Sunday Snapper Rocks swimmers had to be evacuated from the surf following several shark sightings.

According to Dr. Daniel Bucher, senior lecturer in marine biology and fisheries at SCU, there is no need to panic, but swimmers should remain vigilant. “There are more people I know that have had sharks swim under their surfboard and ignored them than have actually been attacked,” Dr. Bucher said.

“It is always worth being conscious, but I would be more concerned about bull sharks in our local rivers and estuaries. The bull shark is considered particularly dangerous because of the number of attacks in murky waters. I would never swim in a canal estate.”

Dr. Bucher, a marine biologist for 21 years, said different types of sharks could be found in Tweed and Gold Coast waters year round.

Grey nurse sharks can be found off the coast from late winter to early spring, whereas tiger, mako and bull sharks are more common in winter. However, it is in the warmer months that shark sightings are more common.

“They go where the food is, so if there are large schools of bait fish there is more chance of them coming in, but if the beaches are slow for food, they will move offshore.” Dr. Bucher said he believed swimmers in deep water and spear fishermen were most at risk of a shark attack, but he can understand why there was a culture of fear when it came to great whites.

“It is so damn big and doesn’t hesitate to tackle something as big as a human,” he said. “And tiger sharks, they are a tropical species. They’ll eat anything, and are often called the garbage bin of the sea.”

Gold Coast Council’s chief lifeguard Warren Young said it was up to swimmers and surfers to use their common sense when it came to sharks. “People need to be vigilant and take responsibility. Don’t go swimming in the early hours of the morning or after dusk,” Mr. Young said.

“Always try to swim with a friend. There is an added risk if you are on your own. “Swim between the flags at patrolled beaches, and if you are in any doubt, ask the surf lifesavers. That is what they are there for.”