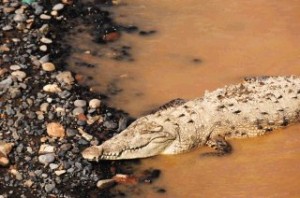 Choosing a spot on the white sand, looking forward to a swim in the tranquil water of this magnificent beach in Punta Leona, Costa Rica. Plenty of trees for shade, not too many people, perfect, paradise on earth… but is it really?

Just as I was about to dive with my grand daughter in June of 2007, I stopped her and we looked in awe at the giant prints of a very large lizard in the sand.

There was no doubt that the marks had belonged to a huge crocodile and that it had come from the sea. No need to say that swimming after that did not seem like such a good idea! Soon, in fact, we realized that guards were walking along the beach warning people and advising them not to go into the ocean!

Flash forward to Sept. 19 of this year, 13-year-old Dakota Kilbride was having fun surfing in Playa Hermosa, just south of Jaco. Dakota was suddenly attacked by a huge crocodile, and only the will to survive and fighting spirit saved his life as he struggled to stay on his board while the crocodile was trying to pull him into the water and to drown him. Dakota suffered severe bites on this ankle and leg and is now trying to recover from the terrifying ordeal.

Another youth, Brynan Sandi, literally ran for his life in Playa Azul and came out unharmed, a lucky escape! The crocodile chased him out of the water and onto the beach where he was able to get away. This, within three weeks of the first attack in the same Central Pacific region of Costa Rica.

The whole coast, from Puntarenas all the way to Esterillos is full of huge crocodiles during the mating season. Normally, the reptiles do not stray far from the rivers and estuaries of the region, but it is said that the crocodiles that show up in the ocean are the ones who lost a fight over a female crocodile during this season. They leave the rivers and cross through the sea in search for another river, maybe still looking for a mate. Some researchers also blame this new occurrence on development, stating that the natural habitat of the crocs is being destroyed, forcing them to move on to less inhabited regions. Crocodiles do not normally attack humans and this aggressive and frightening behavior is certainly out of the ordinary.

In Punta Leona, there are guards because the beach is part of a private beach club. At more popular Costa Rica beaches, signs have been posted stating the dangers of swimming during this season. There are other beaches however that are not protected or marked and surfers and swimmers go into the sea at their own risk, often unaware of the fact that crocs do occasionally go into the sea, in order to find the mouth of another river.

More and more surfers report the sighting of a few crocs passing by as they try and keep motionless on their boards. These crocodiles are huge and reach six meters in length. It is said that some crocodiles have been seen in swimming in Guanacaste and in the Caribbean as well, where there are no warnings either. It is therefore recommended to keep an eye out while swimming in the areas favored by the big reptiles! A crocodile of this size could easily catch and drown an adult in the worst scenario, or give the poor soul the freight of his or her life.

While neighbors of the danger areas and representatives from the Ministry of the Environment acknowledge that crocodiles do not attack humans out of the blue for feeding purposes, the recent attacks were due to the crocodiles feeling threatened by the presence of surf boards or swimmers in their path.