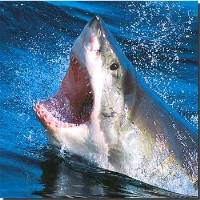 Sharks were in the spotlight in Hastings this week; staff at Blue Reef Aquarium joined a continent-wide campaign to raise awareness of the threats faced by shark species in European Waters. The aquarium hosted European Shark Week (which continues until Sunday) with the hope of converting young people into shark lovers rather than shark haters.

Of the 40 shark species found in European seas, one-third are threatened by intensive and illegal fishing, sport fishing and accidental capture, according to the World Conservation Union (IUCN). The last 15 years have seen an 80-per cent drop in the shark population, and 20 per cent of the European species are on the verge of critical status for survival.

Using a mixture of exhibitions, entertaining talks, feeding demonstrations and fun activities, Shark Week aimed to dispel many of the popular misconceptions of sharks as mindless man-eaters by showing the facts behind the fiction.

As well as coming face to face with living members of the shark family, ranging from native dogfish to black tip reef sharks, there were also quizzes and competitions. The Shark Trust – a UK shark conservation group – gave a presentation offering information on what we can all do to help save sharks.

Blue Reef coordinator Sophie Nuttall said: “We hope that the combination of babies, fun quizzes and our own shark workshops will help to provide our visitors with a different view of these much-maligned predators. We’re getting some very positive feedback from the public and I’m sure that we also managed to convert quite a few of the visitors into, if not shark lovers, then at least shark supporters.”

British waters are visited by around 30 different species – including the world’s second largest, the basking shark, which can grow to 12 meters.

In recent years fisherman have claimed to see huge man-eating great white sharks off the UK coast and last summer sightings of the much-feared fish in southern waters sparked a media frenzy.