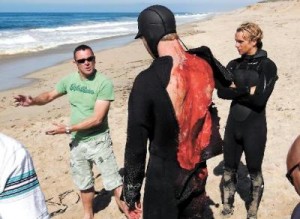 The re-enaction of a shark attack on surfer Todd Endris

A re-enactment of a great white shark attack on a surfer off Marina State Beach last year is scheduled to be part of a TV production for Animal Planet.

A production crew from England has been in Monterey County for about a week filming the story of Todd Endris, the 25-year old Marina resident who was attacked while surfing on Aug. 28, 2007.

Endris suffered bites to the lower back and thigh that morning that caused him to lose half his blood. But he survived thanks, in part, to three other surfers who brought him ashore and called for help. His wounds required 500 stitches and 200 staples to close.

But neither Endris, the men who helped him nor the great white shark — believed to be a 12-footer — will be the focus of the television show.

Harries said the episode featuring Endris’ story will focus on a pod of dolphins that were swimming near the surfer when the shark attacked.

Endris has said he tried to fight off the shark by repeatedly hitting it where he thought its eyes were. The shark bit him three times. Endris said he does not know what caused the shark to let go after the third bite, but he has said he thinks the dolphins swimming near him might have saved him.

Endris, who signed an exclusive rights agreement for his story with a different television show in the weeks following his attack, could not be reached for comment Monday.

Harries said that, according to Endris, the dolphins circled around him, protecting him so the shark couldn’t get back at him. “If Todd would have been bitten one more time that would have been it,” she said.

The four-person film crew with lifeguards from California State Parks and actors hired to portray Endris and the surfers who helped him, staged a re-enactment Monday at Marina State Beach.

Nick Craft, playing the part of Endris, had the back of his wet suit open and fake blood covered his back.

“It’s incredibly dramatic for a man to be out there and a great white come and knock you off your surfboard,” Harries said. “It’s an incredible survival story.”

As part of the production, Harries said interviews are done with the people behind the story and animal experts who explain how animals can come to the help of humans. “Dolphins will act with empathy toward humans,” she said.

The attack on Endris is the 10th recorded in Monterey County waters since the early 1950s, said the state Department of Fish and Game. Two attacks have been fatal.

Dominic Spinardi, 24, a Half Moon Bay surfer hired with his brother Andrew to portray the men who helped Endris in the show, said the possibility of a shark attack is something that lingers in the back of his mind when he’s on the water but not enough to keep him away.

“It’s not going to stop you from doing something you love,” Spinardi said.

Harries said the TV series is scheduled to air in the United Kingdom sometime in February with a 2009 date for showing on Animal Planet in the United States to be determined.

Daniel Lopez can be reached at dlopez@montereyherald.com or 646-4494.