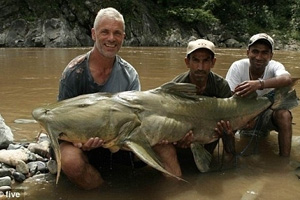 Great headline; if it is aquatic, carnivorous, and has opportunities to eat humans, there’s an excellent chance we’ll be covering it at The Fear Beneath.

Researchers have been dispatched to the Great Kali river in India to study whether a form of giant catfish called “goonches” have taken to preying on humans. The Indians traditionally burn their dead in the river, which, according to local lore, has led in two ways to the fish attacking humans: #1 – because the fish have dined on a steady diet of corpses they have grown unusually large; #2 – eating dead humans has resulted in their developing a taste for flesh which may be leading them to see live humans as a viable source of food.

The first supposed incident of a goonch attack came in 1988 when a 17-year old Nepalese boy was pulled under by an unknown animal when he was cooling himself in the water. Only a few months ago, however, an 18-year old Nepalese boy was killed by what witnesses called an “elongated pig” while swimming in the river. Could it be that the goonches have taken to attacking humans? Could it also be that they only eat delicious teenagers from Nepal?

The story is aggressively pursued by English angler/biologist/television personality, Jeremy Wade. He has already caught a specimen that was 161 lbs. and over 6 ft. long, large enough probably to maybe drown a swimming human.

Wade has immediately discredited the theory that crocodiles are responsible for the attacks, saying, “If a crocodile were to have perpetrated these attacks on humans, stories about me would not have appeared in a few crappy newspapers, thereby making it highly unlikely that crocodiles are to blame and much more likely that giant mutant catfish who normally subsist on a diet of small prawns and insects are the culprits.”