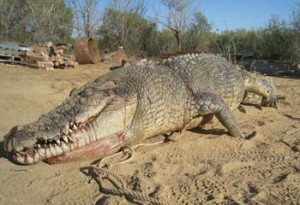 Shooting this crocodile was a mistake - his angry, massive, brother has sworn a blood oath of revenge against Australians

Normally we leave the crocs for our kin Savage Wilderness or the always entertaining Swim At Your Own Risk, but this one is too pissed off to be ignored. Crocodiles have been dominating the animal-savagery news lately after the recent killing of Arthur Booker while camping on a river.

By Peter Michael and Brian Williams

A huge crocodile has been terrorizing road workers in the Gulf of Carpentaria after a rival male was shot and beheaded by trophy hunters. Wildlife rangers revealed the 5.8m crocodile had become highly aggressive in the aftermath of the illegal killing three weeks ago of its smaller rival.

Police and Environmental Protection Agency officers have been investigating the mystery shooting, which has upset both locals and crocodiles. Officers said the big croc has since been stalking and lunging at construction crews working on a bridge on the Albert River near Burketown.

“He is a monster and he is very upset,” said Carpentaria Land Council ranger coordinator Kevin Anderson. “He has been hanging around the bridge and snapping and lunging at anything in the water. Those workers need eyes in their backsides.”

The reptile’s behavior has eerie echoes to the events that inspired the 1996 Michael Douglas film The Ghost and the Darkness, about two lions stalking and killing railway workers in a remote part of 19th century Kenya. Mr Anderson said the huge bull croc became enraged when the dead body of the killed crocodile, a rival male living upstream, floated through his territory.

Workers at the construction site used a large crane to pull the dead 4.4m reptile from the water. It had a bullet wound in its side. Later that night, an unknown “trophy hunter” cut off its head.

“It has really outraged a lot of people in town,” Mr Anderson said. “It is just stupidity and it shows total ignorance of its role in the ecosystem. By killing that croc it has upset the whole balance of the river.”

“The big croc, twice the size of the one that was killed, will now fight and kill at least three other male crocs as they try to take over the territory.” Penalties for killing a crocodile, protected under law, include fines up to $15,000.

Meanwhile, the 4.3 meter crocodile believed to have taken tourist Arthur Booker near Cooktown two weeks ago will probably go to a crocodile farm. Under the state’s crocodile management plan no animal involved in an attack is allowed to be put on display.

“It will not be released back into the wild,” a spokeswoman said. “As it is an iconic animal, the crocodile will not be harmed or killed.”

Two smaller crocs trapped in the Endeavour River near where Booker disappeared will probably be released.