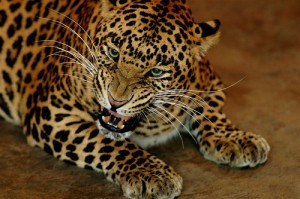 The Fear Beneath covers Savage Wilderness territory:
A man-eating leopard is on the loose in Baramulla!

Alright, first crocodiles, now leopards and bears… What the hell is going on here? We’re trying to spread the word of the Savage Wilderness, that’s what! Last one, we swear. Then it’s back to our usual shark attack song-and-dance. And yes, we read The Kashmir Observer regularly.

A six-year-old boy is missing since yesterday after a leopard dragged him into the forests in a hilly hamlet of the Baramulla district.

Search parties organized by villagers, and assisted by the police, have been combing the woods since the incident, and today came upon blood stains at two places and the torn clothing of the child, making them fear the worst.

Reports said that a large leopard had descended on the Pahal Wajji village in Narwaw, Baramulla on Monday afternoon and pounced on a six-year-old boy, Imtiyaz Ahmad Jatal, who had been walking on the road. The leopard dragged the boy into the forests, and when villagers heard his screams, hundreds of them set off in hot pursuit.

But despite frantic searches, they found no trace of the boy till late at night. Nearly 300 hundred villagers, accompanied by the Sheeri police, headed into the woods again this morning, where they were said to have found blood-stained spots, and the boy’s torn clothing. This had raised fears that the leopard might have killed the boy and dumped the body somewhere.

A leopard was sighted again near the locality today, throwing the people into terror. A large number of the people, accompanied by the police, have launched a massive hunt for the boy covering a vast forest tract, but found no clue to what had happened to the victim.

Locals said that this was the sixth incident of its kind this year when a life had been lost in attacks by wild animals. 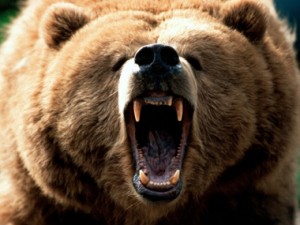 A gigantic brown bear with a bad, bad, attitude can be your worst day - and your last.

Meanwhile, a massive bear, who injured one villager in an attack, has taken refuge in a field in Tulla Mulla after being driven out from the Barsu locality of Gandarbal on Monday morning.

The bear had appeared in the area in the early hours, but had headed for the Hayat Nagar swamp after being chased by villagers. As villagers tried to dislodge the bear from the field, it struck back, injuring one Imtiyaz Mir severely in the face. The victim had to be hospitalized at the SKIMS.

The bear remained the centre of public attention for the entire day as it was besieged by huge crowds, with wildlife personnel and the police trying to capture it.