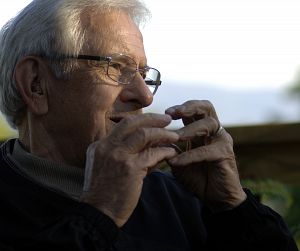 Though we’re well aware of the incident, this is our first time reporting on the USS Indianapolis. We’ll get there, in due time. In the meanwhile, enjoy this article from the Bristol Herald Courier…

They had watched 63 of their comrades die, one by one, over three days. Some were killed in shark attacks, some succumbed to deadly injury and others died of thirst and hunger. It was their third day stranded in the Philippine Sea. There were 17 of their group left.

Harrell’s voice shook with emotion Sunday as he retold his story for what could have been the thousandth time. It’s been more than 50 years since a Japanese submarine torpedoed and sank his ship, the USS Indianapolis, two weeks before the end of World War II. But time has not diminished his emotions.

“The largest casualty at sea in the history of the U.S. Navy is the sinking of the Indianapolis,” he said in a speech at the Slater Community Center. “There are 71 of us still living as of Monday this week.”

Harrell told his harrowing tale to a large group gathered in the center’s auditorium as part of a nationwide book tour. “Out of the Depths” details his experience and is a story not really about survival, or terror or disaster, but about faith.

There were 1,196 men on the USS Indianapolis on July 30, 1945, when it was attacked 14 minutes after midnight. The boat had delivered to the U.S. air base on Tinian Island crucial parts of the first atomic bomb dropped in combat and was 500 miles off the Philippines coast when it went down, Harrell said.

No one noticed the boat was missing, and of the 900 men who survived the attack, only 317 remained alive when they were rescued five days later. After the attack, Harrell and 79 other men linked their life jackets together and waited for help to arrive. When it finally did, only 17 of the group were still alive.

“We’d see those shark fins swimming around us. They were as curious about us as we were them. A man would get a high fever from an injury. He would begin to hallucinate and imagine he saw an oasis. He would leave to swim to it and all of a sudden you would hear a blood-curdling scream and he would disappear. Then, his kapok [life] jacket would appear in a red pool of blood growing in the water,” he said.

Harrell had gotten off watch at midnight on the night of the attack and was trying to fall asleep when the boat was attacked, he said. He managed to get a life jacket and survived the sinking only to spend the next five days at sea.

At night, water temperatures dropped below 85 degrees and men died of hypothermia. During the day, as planes flew overhead – too high to see the carnage below – men committed suicide by simply letting go. As a group, the men were safe from sharks in the infested waters, but many men who ventured off alone were eaten alive.

Harrell survived with the help of a friend, Spooner, with whom he linked legs at night to stay warm and talked out of committing suicide during the day, he said. Spooner was worse off than Harrell; he dove into an oil spill when the boat sunk with his eyes open and when the oil dried, he became unable to blink.

Harrell remembers the first couple of days at sea better than the last. In fact, he said he has almost no recollection of the last day and night. All he remembers is that he mistook a fellow sailor for his Uncle Edmund.

On the fifth day, a pilot flying 8,000 feet above became irritated when the radio antennae on his plane broke and he reached his hand out of the plane and looked down to fix it when he saw the bodies in the water below, Harrell said.

Later, Harrell was told the likelihood of a pilot flying at that altitude seeing the wreckage below was akin to spotting a single piece of human hair on the floor across a large room. But the sun was in the right position, the antennae was in the perfect spot and God was watching, Harrell said, and so he is alive today.

“That split second would become one of the greatest moments in history,” he said.

Harrell was spared to spread God’s message, he said. He was one of the lucky few who survived, and he knows it.

“It’s by the evidence of my own eyes that I believe in miracles,” he said.