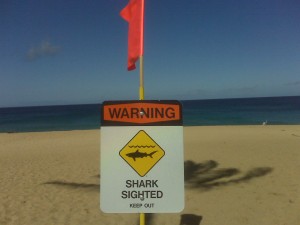 Lifeguards saw a six to eight foot shark near the river mouth at Sunset Beach and advised swimmers and surfers to leave the water before posting warning signs at about 3:30 p.m., said Emergency Services Department spokesman Bryan Cheplic. The shark was not displaying aggressive behavior when it was sighted, Cheplic said.

Lifeguards at Waimea Bay saw an estimated 7-foot shark in the bay about 45 minutes later during a rescue operation involving a damaged catamaran, Cheplic said.,

The signs will remain up at both sites as officials plan to evaluate the situation at about 6 p.m., Cheplic said.

UPDATE: A dedicated Fear Beneath reader living on the North Shore sent in the above picture of the shark sighting warning sign, still posted at Waimea Bay on Monday morning.