Another electrifying tale from the S.R.C.!

Here at The Fear Beneath we’re all grateful to Clayton Fischer for sending in this incredible story – a huge great white shark, cruising our neighborhood waters; and to Ralph Collier, at The Shark Research Committee, for his continued hard work and dedication.

On November 17, 2008, Clayton Fischer was SCUBA diving for lobster off the North side of the West end of Anacapa Island, Santa Barbara. It was 7:30 AM and he had been in the water about 15 minutes. The sky was clear with the air temperature 65 – 70 degrees Fahrenheit. The ocean was calm with light winds and over 75 feet of water visibility with a recorded water temperature of 52 degrees Fahrenheit. He was on the bottom, over a reef, in 120 feet of water. No lobsters had been taken prior to the encounter.

Fischer recalled; “I was lobster diving early in the morning working the outside of a reef structure in 90-120 feet of water. The reef structure in the area is a series of fingers with sand channels between them. While working down one of the fingers the shark appeared in my peripheral vision. The visibility was good in the area, 70 feet or so, so I saw the fish coming from a ways off.” 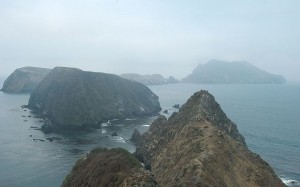 “It passed by me within 25 to 30 feet on the outside of the reef over the sand. A very big fish, 15 to 18 feet long with no scarring that I noticed. It was incredibly thick and seemed to swim without even its tail moving. I ‘hugged’ the reef and watched as it made a slow circle and came back for another look at me. The shark did not behave aggressively at all and in hindsight, I am sure it was only checking me out.”

“However at the time being converted from predator to potential prey was frankly terrifying. After the second pass I decided to terminate the dive but as it was a drift dive I knew the boat was picking up another diver about 800 yards away at about the same time so I worked my way to the shallower end of the reef in about 75 feet of water and waited for the boat to come over. My biggest concern was spending time on the surface. Usually we have to signal the boat with a whistle and/or a marker buoy, then wait to get picked up.”

“Luckily it was a very calm morning so I knew they would see my bubbles, especially if I wasn’t moving. Also since the water was very clear I was able to see the surface from where I was so when the boat came I saw it stop right over me. The size of the fish is what made the biggest impression on me. I have been diving the Channel Islands for over 30 years and have had my share of scares but have never had an experience even close to this. As divers we feel like we are the apex predators in the water. No more. I have seen nature shows, read accounts of shark encounters and attacks but none of it prepared me for a face to face.”