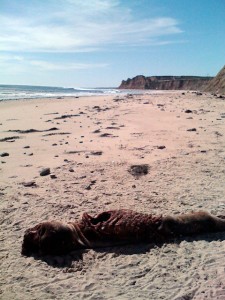 A fearful and dedicated reader of The Fear Beneath sent in these EXCLUSIVE and graphic images from the coast of the Bixby Ranch, in Northern Santa Barbara County.

The images depict the badly decomposing and scavenged carcass of a seal, common local sea life in Santa Barbara County and a favorite snack of sharks, due to the energy-rich fatty flesh of the pinniped.

A gaping hole in the rotting corpse appears to have been the product of a deadly assault by California’s most feared ocean predator – the Great White Shark. The bite diameter lends credence to the theory that this attack was committed by a juvenile shark, just beginning to learn how to eat large mammals, with a tremendous career of ocean terror still lying ahead of it…