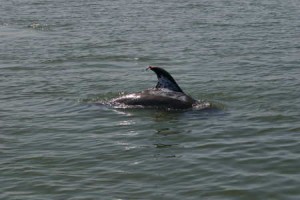 CLEARWATER — Blood was pooling in the water off Stephen McCulloch’s boat Tuesday morning. He kept his phone call about the injured dolphin brief.

“We’ve witnessed a tiger shark attack on Dunham. He’s mortally wounded,” said McCulloch, a Harbor Branch Oceanographic Institution director. “There may be a possibility we need to euthanize him.”

About 400 miles away, Kevin Walsh answered his phone at the Gulf World Marine Park. The dolphin he had helped nurse from near death for seven months now needed to die.

Walsh called Dunham’s veterinarian, who came to the dolphin’s side carrying a lethal dose of Beuthanasia. She saw the wound, the blood. She decided Dunham couldn’t be saved.

“It was one thing to witness nature,” McCulloch said. “It’s another thing to watch the people who spent their last (seven) months caring for the animal see something so horrible and have to put him to sleep.”

Midnight, Christmas Day, 2008. Gulf World was cold, dark and quiet. In a large, heated pool, Walsh floated Dunham in his arms. Nearly all 245 pounds of the dolphin were dead weight. Let him go, Walsh knew, and he’d sink and drown.

A fisherman had found him days earlier on the sand of Anclote Key. The sick Atlantic bottlenose had kept to shallow water until the tide rolled out.

For three weeks, caregivers at the Panama City Beach facility wouldn’t leave Dunham’s side. He was weak with pneumonia, parasites and ulcers, and his gray skin was burnt, scabbed and scarred. “He was basically bones with skin,” Walsh said.

Nine out of 10 stranded marine animals die, the damage already too severe. Dunham seemed to be near the end.

“When you’re holding an animal up for 24 hours (a day) for three weeks,” said Secret Holmes, director of marine mammals at Gulf World, “you just don’t think he’s going to make it.”

Over the weeks of constant care, Dunham’s silence turned to whistles and clicks. He began to swim again.

His caregivers, for their safety and his, kept their distance. He was still under heavy medication and could die any minute. In case he did recover, he would need to fend for himself. Instead of hand-feeding, they tossed his fish in the water. They watched but never made eye contact.

“This could end at any time,” Holmes said. “You don’t want to get attached.”

Hidden from Gulf World’s visitors, Dunham’s life stretched on. His wounds healed. He didn’t need 24-hour care anymore, but maintenance and security workers watched him overnight. Holmes kept her phone close when she slept and could rush to Dunham in 10 minutes.

After seven months of care, Dunham was ready for release.

Walsh has worked with marine animals for 37 years. He knows the pain of losing one. Still, he was in disbelief at McCulloch’s call.

Speaking Wednesday, the day after the attack, he did his best to stay professional, detached. But the grief is hard to hide.

“You can still bring us to tears if you want to. That’s where we’re at,” Walsh said.

“Is there an emotional attachment? Hell, yeah. We put a lot of time, effort, blood, sweat and tears into it. You can’t help but have that moment where you are devastated by it.”

Sadness gave way to anger. Dunham’s caregivers, mocked for challenging nature’s cruelty, became defensive. Some people poked fun at their work and questioned how Dunham was released. Their work was being made by some into a national laughingstock. Why, the handlers wondered, did everyone else care about Dunham only after he died? Where were they for the seven months before?

They’re trying to move on now. Gulf World’s crew returned to the Panhandle as soon as their time with the necropsy finished. They had planned to rest after Dunham’s release but stayed awake a day longer.

McCulloch and the ambulance drove back to Harbor Branch, on the Fort Pierce campus of Florida Atlantic University. He still remembers massaging Dunham’s muscles and whistling with him on the trip to his Dunedin Causeway release. The memory of the veterinarian’s face when she saw Dunham’s blood hasn’t faded.

So why do they do it? Why endure months of exhaustion to help a dolphin back to health, with all the risks involved? Why open yourself to the heartbreak?

“When that dolphin hits the beach,” McCulloch said, “somebody has to do something.”