At least 11 tiger sharks – some up to four metres long – have been caught in shark nets and on drumlines off Sunshine Coast beaches in recent weeks, with one shark expert warning thousands more are cruising the region’s waterways.

The revelation follows a large, aggressive tiger shark menacing two kayakers as they paddled to shore from Mudjimba Island on December 20.

Queensland shark control program manager Tony Ham said the increased movement of tiger sharks was an annual event signifying the end of the breeding season and the start of feeding frenzies as the feared predator gorges on large schools of bait fish along the Queensland coast.

Mr Ham warned people against swimming in dirty water, near large schools of bait fish and in rivers, creeks or canals. “There’s nothing particularly to be alarmed about – it’s just that spring-summer movement of sharks around the place,” he said. “(But) people should obviously take care when they swim.” 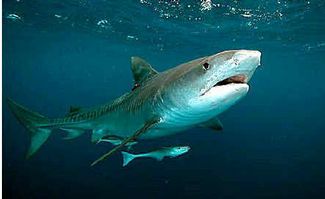 A recent spate of Tiger shark catches off Sunshine Coast beaches has triggered a warning for swimmers.

He said for every tiger caught in a net or on a drumline, hundreds more were lurking in the area. “Scientists are trying to work out what’s happening to all the turtles. “But I know what’s happening to them – they’re being eaten by tiger sharks,” he said.

“That’s why there have been more attacks and more people disappearing right around Australia. It’s not going to get better. People have got to learn to be careful.”

The Coast’s shoreline is protected by 11 shark nets and 78 drumlines. A total of 79 sharks, mostly tiger and bull sharks, were caught in 2008 – 25 more than the previous year.

A four-metre tiger shark can weigh between 400kg and 450kg, although five-metre-plus tigers can weigh more than a tonne. Their potential contact with humans is increased because they regularly visit shallow reefs, harbours and canals.

The tiger is second only to the great white shark in the number of recorded attacks on humans.