The 52-year-old surfer, local lifesavers and island boardriders fear the huge man-eater was responsible for the horrifying shark-on-shark attack off the island, east of Brisbane, which The Sunday Mail featured in graphic photographs in late October.

The smaller 3m white pointer, snared on a baited drumline set off North Stradbroke’s busy Cylinder Beach, was almost bitten in half by the bigger shark.

Mr Specht, who has surfed for more than four decades on the island, said he and fellow surfers who were used to swimming with sharks had switched to predator alert. 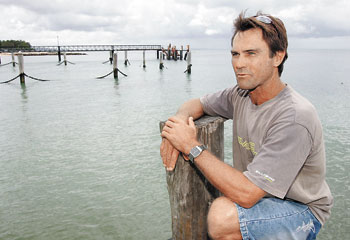 “It was frightening. It was like a submarine heading towards me. I didn’t expect to live,” Mr Specht said.

He and several mates were surfing more than 100m off Main Beach when a younger boardrider shouted to them about the approaching monster.

“This thing came at me from behind. The other four guys with me, they took off to the beach and left me,” Mr Specht said.

“My first instinct was to paddle out to sea. Then I thought that this is not right, this is exactly what he wants me to do.”

Mr Specht bravely chose to sit quietly on his board and “eyeball” the shark – at least 4m long – as it came close enough to touch.

“I’m on a six foot three inch board. I’m thinking if he’s going to have a go at me he will eat me. But I thought you’re going to have to eat this board first,” Mr Specht said.

The champion surfer and Point Lookout Boardriders Club life member sat motionless on the board as the shark went directly under him, just 1m below, on its second pass.

Fellow surfers believe the same shark was hooked on a drum line off the beach later that day. The drumline “exploded” as the great white managed to free itself.

After spotting between 10 and 15 sharks off Main Beach in the past week, Mr Specht said he and other surfers were taking extra precautions and not surfing alone.

He said it was important to report his encounter just three weeks ago to warn holidaymakers that a dangerous great white shark was in local waters.

Surf Life Saving Queensland Gold Coast services co-ordinator Stuart Hogben, who has been on recent flights by the Westpac helicopter to North Stradbroke Island, supports Mr Specht’s suspicions about the great white being responsible for the attack on the other shark.

Mr Hogben saw several 2-3m sharks about 200-300m offshore along the island’s surf side during a flight last weekend. Other sightings were made off the Gold Coast.