UPDATE: The National Park Service has issued a warning to swimmers in the Santa Barbara Channel. Watch out for Great Whites this holiday weekend!

A flurry of shocking Great White Shark activity has Santa Barbara residents staying out of the water, fearing for their very lives as a series of shark attacks and sightings have rocked this normally peaceful beach town and shaken ocean-goers to their core.

Over the weekend, a badly mauled sea lion was discovered hanging from a buoy off the “family-friendly” and extremely popular East Beach. The pinniped’s injuries were so extensive that it had to be euthanized at the local Marine Mammal Center. It’s good thing the sharks have yet to acquire a taste for volleyball players and homeless people… 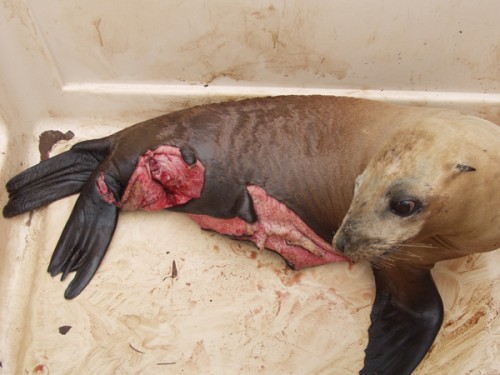 This poor creature was the victim of a hollow-eyed remorseless killer. (Credit: Peter Howorth)

Soon after the poor sea lion was dispatched in gruesome fashion, the body of a Great White Shark was found washed up on the beach near the infamously shark-y Rincon Point. Surfers beware – even the directors of Santa Barbara’s Junior Lifeguard program have suspended operations because of the attack’s close location to shore. It appears that every time someone steps into the ocean in Santa Barbara County, they are leaving their life in the hands of Carcharias Carcharodon.

A day later, Rincon beach-goers rescued yet another shark pup and sent it back in to the ocean. Given the sheer quantity of shark pup sightings, it sounds to us as if the Santa Barbara coastline is a Great White Shark breeding ground. Who wants to dive in and do the research?

If one thing is clear, it’s this: Santa Barbara residents are advised to stay out of the ocean as much as possible – that is, if you don’t want to be lunch for the next Great White Shark that comes along.