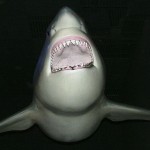 What was said to be a young Great White shark took two bites on an outrigger canoe Sunday three miles off the Santa Barbara coast. The woman on board was sent into the ocean, but was not harmed. Tara Burnley reported the incident to the Harbor Patrol on Leadbetter Beach. The outrigger was clearly chewed but she was unscathed. Burnley said the shark was about six-feet … END_OF_DOCUMENT_TOKEN_TO_BE_REPLACED