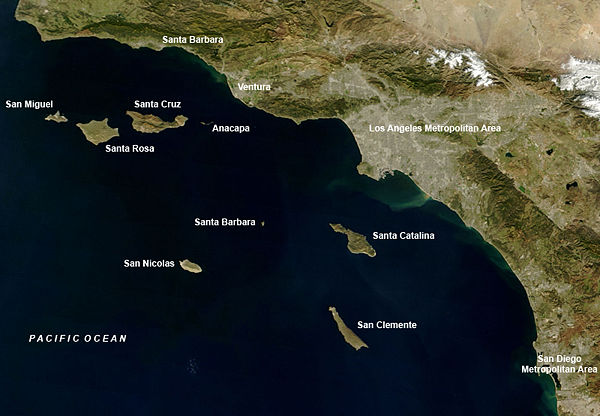 The eight islands are split among the jurisdictions of three separate California counties: Santa Barbara County (four), Ventura County (two) and Los Angeles County (two). The islands are divided into two groups — the Northern Channel Islands and the Southern Channel Islands. The four Northern Islands used to be a single landmass known as Santa Rosae.

The archipelago extends for 160 miles (257.5 kilometers) between San Miguel Island in the north and San Clemente Island in the south. Together, the islands’ land area totals 221,331 acres, or about 346 square miles.

Santa Catalina Island is the only one of the eight islands with a significant permanent civilian settlement—the resort city of Avalon, California, and the unincorporated town of Two Harbors.

The Channel Islands at low elevations are virtually frost-free and constitute one of the few such areas in the 48 contiguous US states. It never snows except rarely on higher tops of mountains.

Channel Islands National Marine Sanctuary is home to a rich and diverse community of marine life. The shoreline topography and currents in this region facilitate mixing of cool, nutrient rich waters from the north with warmer waters from the south, creating a biologic transition zone that brims with life.