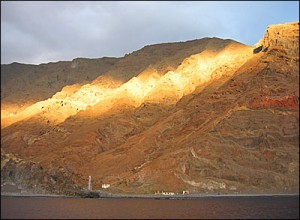 Guadalupe shares the California chaparral and woodlands ecoregion with the Channel Islands of California in the United States, but the island has been practically denuded of all plants higher than a few centimeters by the up to 100,000 feral goats.

Many island or marine species that reside on or near Guadalupe also frequent the Channel Islands, and vice-versa. In stark contrast to the rampant extinction of terrestrial life that happened at the same time, Guadalupe was the last refuge for the Northern Elephant Seal (Mirounga angustirostris) and the Guadalupe Fur Seal (Arctocephalus townsendi) in the 1890s. The island has been a pinniped sanctuary since 1975.

Guadalupe is considered one of the best spots in the world for sightings of the Great White Shark, possibly because of its large population of pinnipeds. A joint team from the USA and Mexico (UC Davis and CICIMAR) are working in tandem with eco-tour operators Horizon Charters, Islander Charters and Shark Diver to tag and study these sharks. 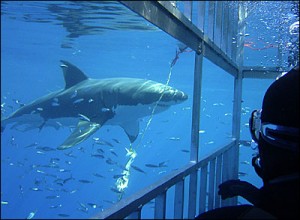 The Guadalupe White Shark population is a real marine science enigma. Very little is known about the reasons behind why these animals congregate here each year in such large numbers. We do know the vast majority of the sharks encountered during our arrival from Sept-Dec are young male sharks in the 10-14 foot class. We also know from sat tagging done by the Pfleger Institute for Marine Science that some of these animals are traveling great distances from the island and back each year. Is this a migration? If so why?

One of several questions we hope to answer over the next few years of careful field operations are local movement patterns, a complete census of animals, feeding patterns, prey behaviors, continuing DNA and blood samples, and more importantly the answer to the biggest question of all “why are these animals here”?