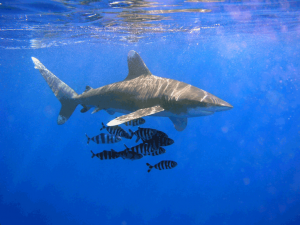 The Oceanic Whitetip Shark is an Aggressive Predator

The oceanic whitetip shark, Carcharhinus longimanus, is a large pelagic shark of tropical and warm temperate seas. It is a stocky shark, most notable for its long, white-tipped, rounded fins.

This aggressive but slow-moving fish dominates feeding frenzies, and is a danger to survivors of oceanic shipwrecks and downed aircraft — it has attacked more humans than all other shark species combined.

Recent studies have shown that its numbers are in steep decline as its large fins are highly valued as the chief ingredient of shark fin soup and, as with other shark species, the oceanic whitetip faces mounting pressure from fishing throughout its range.

The oceanic whitetip shark was first described by naturalist René-Primevère Lesson in his account of observations made during Louis Duperrey’s 1822–1825 circumnavigation of the world on the corvette Coquille. Lesson described two specimens found in the Tuamotu Archipelago in French Polynesia, and named the shark Squalus maou after a Polynesian word for “shark”. However, Lesson’s description and name were forgotten.

It was next described by Cuban Felipe Poey in 1861 as Squalus longimanus. The name Pterolamiops longimanus has been used during its history. The species epithet, longimanus, refers to the size of its pectoral fins (longimanus translates from Latin as “long hands”). The oceanic whitetip shark has many common names in English: Brown Milbert’s sand bar shark, brown shark, nigano shark, whitetip whaler, and whitetip shark.

The rules of the International Commission on Zoological Nomenclature are that in general the first-published description has priority; therefore the valid scientific name for the oceanic whitetip shark should be Carcharhinus maou. However, Lesson’s name remained forgotten for so long that Carcharhinus longimanus is the widely accepted scientific name.

The oceanic whitetip is found globally in deep, open water, with a temperature greater than 18 °C (64 °F). It prefers waters between 20 °C (68 °F) and 28 °C (82 °F) and tends to withdraw from areas when temperatures fall below this. They were once extremely common and widely distributed, and still inhabit a wide band around the globe; however, recent studies suggest that their numbers have drastically declined. An analysis of the US pelagic longline logbook data between 1992–2000 (covering the Northwest and Western Central Atlantic) estimated a decline of 70% over that period.

They are found worldwide between 45° north and 43° south latitude. In 2004, an oceanic whitetip was discovered dead on the west coast of Sweden — far beyond what was once considered the northern boundary of its range.

The shark spends most of its time in the upper layer of the ocean—to a depth of 150 metres (490 ft) —and prefers off-shore, deep-ocean areas. According to longline capture data, increasing distance from land correlates to a greater population of sharks. Occasionally it is found close to land, in waters as shallow as 37 metres (120 ft), mainly around mid-ocean islands such as Hawaii, or in areas where the continental shelf is narrow and there is access to deep water nearby. It is typically solitary, though gatherings have been observed where food is available. Unlike many animals, it does not have a diurnal cycle, but is active during both day and night. Its swimming style is slow, with the pectoral fins widely spread. Despite their habitual isolation from members of their own species, they may be observed with pilot fish, dolphinfish, and remora. In 1988, Jeremy Stafford-Deitsch reported seeing an individual accompanied by a shortfin pilot whale.

The most distinguishing characteristic of C. longimanus is its long, wing-like pectoral and dorsal fins. The fins are significantly larger than in most other shark species, and are conspicuously rounded. The shark’s nose is rounded and its eyes are circular, with nictitating membranes.

C. longimanus has a ‘typical’, although somewhat flattened requiem shark body, often with a mildly humpbacked aspect. It is bronze, brown, bluish or grey dorsally (the colour varies by region), and white ventrally (although it may occasionally have a yellow tint). The maximum size of the oceanic whitetip shark is 4 metres (13 ft), although usually it does not exceed 3 metres (10 ft). Its maximum weight is 170 kilograms (370 pounds). The female is larger than the male (although typically only by 10 centimetres (4 in)) with males about 1.8 metres (71 in) and females about 1.9 metres (75 in).

Most of the fins on its body (dorsal, pectoral, pelvic, and caudal) have white tips (juvenile specimens and occasional adults may lack these). As well as the white tips, the fins may be mottled—and in young specimens can even have black marks. A saddle-like marking may be apparent between first and second dorsal fins. The shark has several kinds of teeth—those in the mandible (lower jaw) have a thin serrated tip and are relatively small and triangular (somewhat fang-like). There are between 13 and 15 teeth on either side of the symphysis. The teeth in the upper jaw are triangular, but much larger and broader with entirely serrated edges—there are 14 or 15 along each side of the symphysis. The denticles lie flat and typically have between five and seven ridges.

C. longimanus feeds mainly on pelagic cephalopods and bony fish. However, its diet can be far more varied and less selective—it is known to eat threadfins, stingrays, sea turtles, birds, gastropods, crustaceans, mammalian carrion, and even rubbish dumped from ships. The bony fish it feeds on include lancetfish, oarfish, barracuda, jacks, dolphinfish, marlin, tuna, and mackerel. Its methods of predation include biting into groups of fish and swimming through schools of tuna with an open mouth. When feeding with other species, it becomes aggressive. Peter Benchley, author of Jaws, observed this shark swimming among pilot whales and eating their feces.

The oceanic whitetip is usually solitary and slow-moving, and tends to cruise near the top of the water column, covering vast stretches of empty water scanning for possible food sources. Until the 16th century, sharks were known to mariners as ‘sea dogs’ and the oceanic whitetip, the most common ship-following shark, exhibits dog-like behavior when its interest is piqued: when attracted to something that appears to be food, its movements become more avid and it will approach cautiously but stubbornly, retreating and maintaining the minimum safe distance if driven off, but ready for a rush of boldness if the opportunity presents itself. Oceanic whitetips are not fast sharks, but they are capable of surprising bursts of speed. It is commonly found competing for food with silky sharks, making up for its comparatively leisurely swimming style with an aggressive attitude.

Groups are often formed when nearby individuals converge on a food source, whereupon the fabled “feeding frenzy” may occur. This seems to be triggered not by blood in the water per se, or by bloodlust, but by the species’ highly strung and goal-directed nature (conserving energy between infrequent feeding opportunities when it is not slowly plying the open ocean). The oceanic whitetip is a competitive, opportunistic predator with great incentive to exploit the resource at hand, rather than avoiding trouble in favor of a possibly easier meal in the future.

There does not seem to be a segregation by sex and size as with some other species. Whitetips will follow schools of tuna or squid, and will trail groups of cetaceans such as dolphins and pilot whales as scavengers of their prey. Their instinct to follow is so strongly imprinted, as the result of countless millennia of baitfish migrations, that they will accompany ocean-going ships. When whaling took place in warm waters, oceanic whitetips were often responsible for much of the damage to floating carcasses.

Mating season is in early summer in the northwest Atlantic Ocean and southwest Indian Ocean, although females captured in the Pacific have been found with embryos year round, suggesting a longer mating season in this region. The shark is viviparous—the embryos develop in utero and are fed by a placental sac. It has a gestation period of one year. Litter sizes vary from one to 15 with the young born at a length of about 0.6 metres (24 in). Sexual maturity is reached at close to 1.75 metres (69 in) for males and 2 metres (80 in) for females.

It is a commercially important species to the extent that its fins are prized for soup and its meat and oil frequently utilised. It is used fresh, smoked, dried and salted for human consumption and its hide is utilised for leather. It is subject to fishing pressure throughout virtually its whole range — although it is more often taken as by-catch than by design, since it takes bait from longlines intended for other species.

Famed oceanographic researcher Jacques Cousteau described the oceanic whitetip as “the most dangerous of all sharks”. Despite the greater notoriety of the great white shark and other sharks habitually found nearer the shore, the oceanic whitetip is considered responsible for more fatal attacks on humans than all other species combined, as a result of predation on those shipwrecked or from aircraft downed in the open ocean. These incidents are not included in common shark-attack indices for the 20th and 21st centuries, but would appear to total in the thousands worldwide, with one incident alone, the torpedoing of USS Indianapolis on July 30, 1945, giving a minimum figure of between 60 and 80 sailors killed by sharks. It is said by some that tiger sharks were responsible for some of the Indianapolis deaths, but this has never been confirmed. Also during World War II, the Nova Scotia, a steamship carrying approximately 1,000 people near South Africa was torpedoed and sunk by a German submarine. There were only 192 survivors, and many deaths were attributed to the oceanic whitetip shark.

The oceanic whitetip poses a minimal threat to bathers or inshore sportsman, but a high risk for humans caught in the open ocean in conditions in which they might be seen as prey.

Although the oceanic whitetip is highly opportunistic and aggressive, and has been known to attack humans for food, divers have swum with this shark repeatedly without being harmed. Divers are advised to approach the shark only with extreme caution, not spear fish near this shark and, if the shark comes too close or gets too inquisitive, to get out of the water as soon as possible. It is suggested regarding sharks in general that if a shark begins to push a diver, it should be hit on the snout, gills or eyes; however, anecdotal evidence suggests that this may be less effective in deterring whitetips.

In 1969, Lineaweaver and Backus wrote of the oceanic whitetip: “[it is] extraordinarily abundant, perhaps the most abundant large animal, large being over 100 pounds [45 kg], on the face of the earth”. There was little further population study until 2003 when the numbers were estimated to have dropped by as much as 70% in the Northwest and Western Central Atlantic between 1992–2000. Another study focusing on the Gulf of Mexico, using a mix of data from US pelagic longline surveys from the mid-1950s and observations from the late-1990s, estimated a decline in numbers in this location of 99.3% over this period. However, neither changes in fishing practices nor differences in the data collection methods were fully considered. Because of this there is debate as to the validity of the estimations.

As a result of these findings its status on the IUCN Red List was moved to “Vulnerable” globally (from “Lower Risk/Near Threatened”) and “Critically Endangered” in the Northwest and Western Central Atlantic areas. Under the 1995 UN Agreement on the Conservation and Management of Straddling Fish Stocks and Highly Migratory Fish Stocks (UNFSA), coastal and fishing states are specifically required to adopt measures to ensure the conservation of listed species, but little progress has been made in this area with regard to the oceanic whitetip.