(Courtesy of the Santa Barbara Independent)

1. Great White: Reach more than 20 feet in length and weigh up to 5,000 pounds, and often get as wide as a Volkswagen bus. World’s largest known predatory fish.

2. Blue Shark: Reach up to 13 feet in length and weigh 300-400 pounds. Feeds primarily on small fish and squid, but can take larger prey. Blues may pose danger to humans if they are encountered in large groups. Second fastest sharks, next to the mako shark.

3. Tiger Shark: Reach 11-14 feet in length and weigh 850-2,000 pounds. Notorious for attacks on swimmers, divers, and surfers. Second only to great whites, coming close with bull sharks in number of recorded attacks on humans. Considered one of the most dangerous sharks to humans. 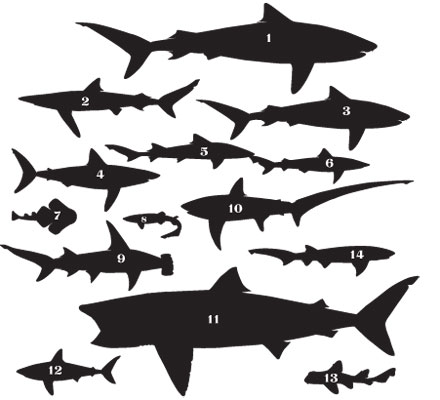 Sharks of the Santa Barbara Channel

4. Shortfin Mako: Reach up to nine feet in length and 450 pounds. One of the fastest swimmers in the sea. Rarely seen in near shore waters. Feeds on mackerel, tuna, swordfish, and other sharks.

6. Soupfin Shark: Reach up to six feet in length. Feed on fish, crustaceans, cephalopods, worms, and echinoderms. Also known as the school shark.

7. Angel Shark: Flattened bodies and broad pectoral fins give them a strong resemblance to skates and rays. Reach up to five feet in length. Bury themselves in sand or mud and then jump up to snap up prey, which includes fish, crustaceans, and various types of mollusks. Bite when stepped on.

10. Thresher Shark: Reach from 10-20 feet in length. Feed on schooling fish, squid, and cuttlefish. One of the few shark species known to jump fully out of the water and make turns like dolphins.

13. Horn shark: Reaches four feet and weigh 22 pounds. Nocturnal and appears sluggish in the daytime. It can bite if it is harassed. Feeds on invertebrates, primarily sea urchins and crabs, as well as abalone and fish.