byron bay
You are here: Home / Archives for byron bay 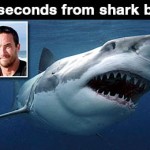 BYRON BAY, AUSTRALIA Broad Beach surfer Ben Vining felt like a sitting duck after what he says was a shark knocked him from his board at Byron Bay. Mr. Vining has told of his ordeal in the surf at Tallows beach on Saturday, saying his board was carried off by a rip and he had to wait 15 seconds to catch a wave to shore while the shark watched him. The 29-year-old had … END_OF_DOCUMENT_TOKEN_TO_BE_REPLACED