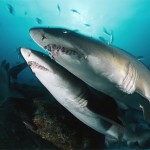 Marine science writer Susan Scott can be reached at www.susanscott.net OCEAN WATCH: HONOLULU After a shark attack on Oahu last week and several shark sightings around the state, the Department of Land and Natural Resources included this phrase in a news release: "Experienced fishermen and scientists know that some shark species come into shallower waters during this time … END_OF_DOCUMENT_TOKEN_TO_BE_REPLACED