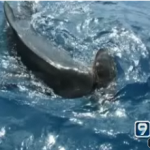 By Tim Sakahara Its shark versus turtle and it wasn't much of a fight. While the shark snapped its jaws, the people snapped some shots giving boaters an eye-full. The pictures were taken on Monday less than a mile off shore in Maunalua Bay just outside the surf spot called Turtles. Koko Crater and Portlock are seen in the background. The shark at one point comes right … END_OF_DOCUMENT_TOKEN_TO_BE_REPLACED