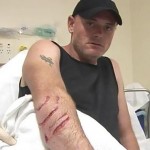 At 2:54 p.m. on Wednesday, the Sanibel Police Department responded to an incident reported by the Lee County Sheriff's Department Marine Patrol Unit. According to the report, a 47-year-old man reported that he believed he was bitten on the right arm by a shark while swimming in front of the Sanibel Moorings, located at 845 East Gulf Drive. The caller further reported … END_OF_DOCUMENT_TOKEN_TO_BE_REPLACED